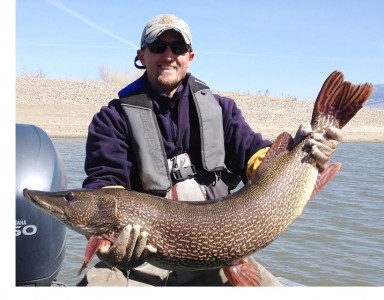 Readers of the Montana Outdoor Radio Show website have seen the photos of the huge pike that have been pulled out of Canyon Ferry Reservoir by Fish Wildlife and Parks’ fishery crews this spring. They have been huge! Yet the lake never stocked pike and has worked to remove the fish from the lake. The high water year of 2011 seemed to have flushed pike that were reproducing from the system, because none showed up in 2012 netting work. But now they are back and bigger than ever, so what happened? According to FWP’s Eric Roberts, when the Toston Dam broke in 2013, the reservoir was nearly drained. That’s probably where the monster pike came from. FWP has been trying to eliminate northern pike from the Missouri River at Toston Dam upstream, as well as in Canyon Ferry, to protect the trout fishery. Plus, it’s believed Canyon Ferry couldn’t handle another big predator like pike, given that the lake is already populated by walleye.

For a more extensive report on the fisheries at Canyon Ferry, Hauser and Holter, see my story at: http://billingsgazette.com/ lifestyles/recreation/.