Close Call on the Bitterroot River
By OutdoorAly

“I need a drink,” I said to my husband before recounting the long estrogen-filled day I had just experienced attending a baby shower. It was early May about five years ago, and all the guys had headed out on the river, eager for an excuse to avoid the whole event. He sat quiet, patiently listening to me list off all the reasons I believe such traditions to be a form of torture to women. Then he dropped the bomb:

“My friend almost died on the river today.”

He said it calm and quiet, then explained how while I was living my own version of pink girly hell at a baby shower, he and all the other husbands had experienced a much more realistic version of hell on the water.

Their boat had capsized. They weren’t wearing life jackets. They were caught against a tree in the river, and the current was going to take them under.

In an instant I realized everyone’s day could have been worse…a lot worse. 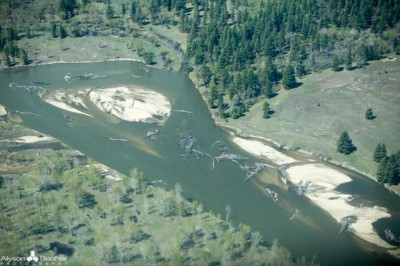 Spring on the Bitterroot

This time of year the river looks calm and tranquil, but any local angler knows this river is deceptive and deadly, especially at runoff.

As one local guide, Matt Devlin put it:

The general character of the ‘Root changes dramatically from year to year because the substrate is mostly fist to pea-sized gravel, and is subject to being pushed around quite a bit during runoff. This fact only adds to the river’s mystique, but it also adds to her danger.

The Bitterroot is statistically one of the most dangerous rivers in the state and should be avoided by all but the most experienced oarsperson except for the lowest of August flows.

(to read the rest of his story from Make It Missoula, click here.) 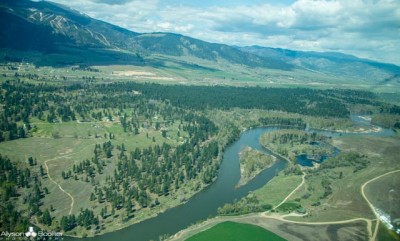 Saved by the Belt
The seemingly calm slow water must have looked inviting to the group, unfortunately they saw the silent, swift, and savage side of the Bitterroot first hand. One drift boat ended up sunk at the bottom of the Bitterroot river, the other put up for sale on Craigslist not long after loading it at the takeout.
Inexperienced. Uneducated. Likely a little buzzed.
This lack of judgement was the perfect trifecta for disaster that day. About an hour after launching, one of the drift boats upriver hit a tree. Unable to shove the boat loose with oars, it quickly started taking on water. All three plus a dog went overboard bobbing down the river behind a cooler.
Things were calm at this point. My husband tried to intercept the swimmers and dropped anchor in his boat to pull them in. He grabbed the dog, and the three men bobbed past. They were all headed for a tree that had fallen from shore. Two were able to grab on and pull themselves over to shore using branches.
The anchor in his drift boat upstream wasn’t holding, and as the last guy was working his way towards shore the drift boat found its way downstream and pinned him in the water against the tree. 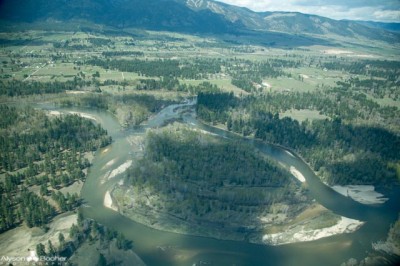 My husband hopped on top of the tree and tried to shove the boat off his friend, it wouldn’t budge. Someone had a knife. They cut the anchor line and freed the boat, but his friend was exhausted. He couldn’t move. He was heavy. They couldn’t pull him up.
It was just a matter of time before the pressure of the river water pushing against his tired body loosened his grip and took him under, likely never to come back up alive.
With one last effort my husband reached down and was able to secure a hold on his friends belt.
He yanked hard and pulled him up onto the log. They all made their way to the take out in the other drift boat and a raft, leaving one boat partially submerged; a haunting sign warning all that floated past that day.
It was a long, silent ride home.
“If it he weren’t wearing a belt, I don’t know if I could have pulled him out of the water,” my husband recounted.
It was the day before Mother’s Day, and the biggest, baddest mother of them all had given them a gift, and friendly reminder:
Don’t mess with Mother Nature! 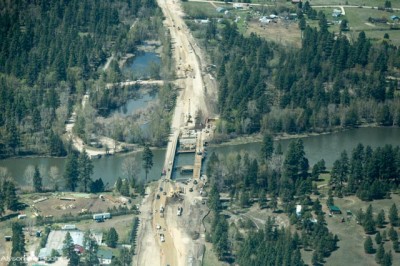 Aerial view of boat access and construction work on the Florence bridge along the Bitterroot.