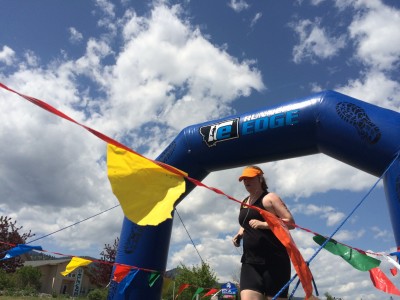 Giving a Triathlon the “Old College Try”
By OutdoorAly

They say the road to hell is paved with good intentions. That must be how I found myself in the middle of a die-athalon on Saturday morning. Wait, did I say DIE-athalon? Whoops, I meant triathlon.

After spending much of the winter alternating between hibernation and fueling up on carbs I had waken up to face spring much like a grumpy old bear. In an attempt to get back into shape I thought maybe signing up for a triathlon would motivate me to get out and start exercising. After all, if one sport is good, three must be better.

Then in the blink of an eye, the date of said triathlon went from three months away to tomorrow without much training in between. But, in an attempt to scrap some dignity, and the fact that there were no refunds, I decided to give it the old college try and follow through with my commitment.

A triathlon is a multiple-stage competition involving the completion of three continuous and sequential endurance disciplines. While variations of the sport exist, triathlon, in its most popular form, involves swimming, cycling, and running in immediate succession over various distances.

The one I signed up for was a shorter version called a “sprint” triathlon consisting of a 500 yard swim, 12.4 mile bike ride, and a 3.1 mile run put on by the local athletic club, The Peak, in Missoula. But for an out of shape lethargic version of myself there was nothing “short” about this race.

About half way through the bike section of the race, I approached the first hill. I shouted to one of the volunteers, “How many walkers have you had?” He just laughed. I took that as none, and I wasn’t going to be the first. I barely made it to the top in the lightest gear possible, but I survived without suffering any coronary emergencies.

Then something amazing happened, I was able to stop focusing on my shortcomings, and how out of shape I was, and just enjoy being outside. My ride became more about connecting with the outdoors than feeling like I had to beat the heck out of my body as some sort of punishment for being such a glutton all winter.

The course of the race took bikers along the Bitterroot river, and it couldn’t have been a nicer day to be outside. Just when I thought my exercised induced high couldn’t feel any better, I spotted a moose hanging out in a pond just off the side of the course on Blue Mountain Road. In my excitement I started shouting “Moose!” at every passing biker, only to be met with a confused look.

I finished the last portion of the race run/walking 3.1 miles, and couldn’t have been happier to see the giant blow-up finish line. It was done! I didn’t quit, and I achieved my goal; get outside and off the couch. And most important, I was reminded of how truly blessed we are to live in Montana and have the beautiful outdoors and wild animals literally crossing our paths every day.

After the race I asked some other competitors if they had also seen the moose, and to my surprise many had not. So sure, next time I will train a little harder before attempting another triathlon, but this time around being a little slow and enjoying the ride certainly had its advantages.

If you are interested in trying a triathlon yourself Montana is host to quite a few. For a listing click here.