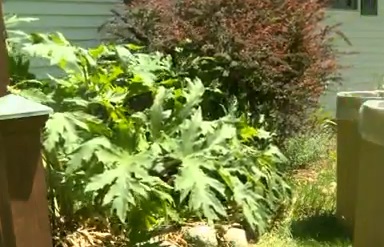 Make sure that regardless of where you are, if you see a Giant Hogweed plant, you don’t touch it and immediately contact proper authorities to remove it or follow the instructions in this video to remove it.  It is rumored that it can be killed with weed killer!  According to this video, the plant can cause severe burning and has been reported to cause blindness in some people and animals after the sap has contact with the skin.

The New York State Department of Transportation website states that Giant Hogweed is “present in much of the Eastern U.S. (Michigan to Virginia) as well as the Northwest in Oregon and Montana. Currently in western New York, spreading to the east. Found in rich, moist soils in open fields, wooded areas, tree lines, roadsides, ditches and along streams and rivers.”  After researching on other sites, it is not confirmed that there is Giant Hogweed in Montana, but be careful either way.

Check out this video to see just how much damage this plant can cause–and DO NOT TOUCH IT IF YOU SEE IT: