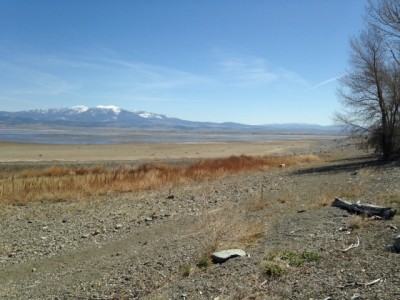 The word around the angling circles is Canyon Ferry Reservoir is so low it is tough to launch a boat on most of the ramps on the lake. In anticipation of a very above year of spring run-off they have decided to drain Canyon Ferry, which is a holding reservoir and the first reservoir the Missouri River chain of dams.

By using Canyon Ferry as a holding tank it gives the U.S. Corp of engineers the flexibilty to control the water flow for all the reservoirs downstream in Montana and beyond, including Fort Peck. Today for example they are letting out 8411cubic feet per second (cfs) and the river is only putting in 6865 cfs. This trend of releasing more water than the lake by Townsend takes in is normal this time of the year but with snowpack over a 100% of the 10 year average the Corp has decided to draw it down a little more than normal.

According to the Bureau of Reclamation BOR boat ramp site   http://www.usbr.gov/gp/boat/index.html  the water elevation on all of the boat ramps is below minimum lauching levels except for the Yacht Basin Boat Ramp on the north end of the lake by the dam. The picture was taken by Chris Farrington from the very north end of Pond 4 looking east to the Belt mountains. You can see all the dry land currently showing, but will be under water hopefully this month sooner than later.