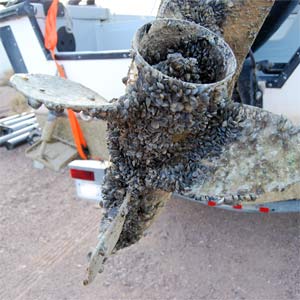 The fight against aquatic invasive species is one the Fish and Wildlife Service has been battling all across the United States for years.

In Montana the focus is western part of the state, which contains four of the top five counties with the greatest number of invasive species in the state – Lake, Flathead, Ravalli, and Missoula. All four of the counties have more than 240 invasive species, according to the University of Georgia Center for Invasive Species and Ecosystem Health.

So far though, the tools used to fight these invaders is limited to public service announcements and deployment of scent detection dogs at a handful of checkpoints. This still leaves boat owners as the sole party responsible for scouring every crevice of their water craft and ridding it of any invaders, which can be as small as a fingernail.

In other states like Minnesota, the battle to protect cherished lakes and rivers from ruinous invasive species such as zebra mussels has also primarily focused on cleaning and inspecting boats.

Now that high-stakes fight is shifting to boat design.

This week leaders in the boating industry will gather in Washington, D.C., to take the extraordinary step of examining how boats could be redesigned in ways that would make it harder for the aquatic pests to hide, even as inspections intensify for Minnesota’s 2.3 million boaters.

According to recent Star Tribune article:

Gabriel Jabbour, a boat manufacturer who owns four marinas on Lake Minnetonka, has been one of the loudest voices calling for a fresh look at boat design.

“These are time bombs and they are a liability to the owners,” he said. “I believe this is a major consumer issue that no one is paying attention to.”

On Wednesday, the American Boat and Yacht Council, which develops widely used safety standards, will ask a national task forceled in part by the U.S. Fish and Wildlife Service to bring together everyone from boat builders to scientists to draft design standards to slow the spread of aquatic invasive species.

“I don’t think it’s been on their radar,” John Adey, the council’s president, said about manufacturers. “There could be simple solutions we haven’t thought about.”

For instance, on pontoons — the fastest-growing sector of the boating industry — it’s increasingly popular to have lifting strakes that run along the side to help it go faster and turn, allowing water skiing or tubing.

But that same part is often sealed at one end and left with a tiny drainage hole at the other end that fingernail-sized zebra mussels can get into, multiply rapidly and be difficult — if not impossible — to flush out.

That kind of pontoon, if placed on Lake Minnetonka, may never be able to leave it since it’s illegal to transport contaminated boats.

“The boating industry has been saying ‘we make boats, you clean them,’ ” said Jabbour, who’s on a state Department of Natural Resources committee on aquatic invasive species. “But with some minor modifications, we could make an enormous stride in the time it takes to wash and inspect boats.”

Even with new boat designs on the horizon, the best way boaters can prevent the spread of these invasive aquatic species is to 1)Inspect 2)Clean 3) Dry all water craft.