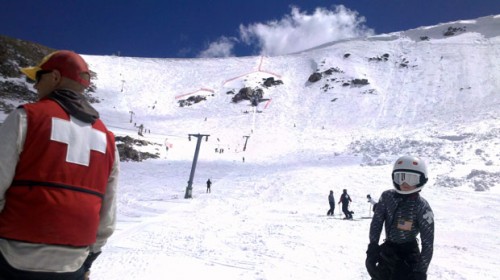 Summer Skiing Opens at Beartooth Basin This Weekend!
By OutdoorAly

While most Montanans have exchanged ski boots for hiking boots this time of year, the hard core snow seekers know not to pack their gear away just yet. Not if they want to take advantage of a little known ski destination called Beartooth Basin, located at an elevation of 10,900 feet on national forest land just inside the Wyoming border.

Beartooth Basin sits atop Beartooth Pass, and opens each summer from Memorial Day to July 4th, making their season a short six weeks. Although the ski area isn’t well known, it has been around for over 50 years.

It was established in the mid-1960’s by austrians Pepi Gramshammer, Eric Sailer and Anderl Molterer as an alpine ski racing summer training ground. Beartooth Basin (formerly: the Red Lodge International Ski and Snowboard Camp) is one of North America’s oldest alpine ski training areas. As the previous owners aged, they found themselves bowing out to a younger generation of skiing enthusiasts who looked to open the area to the public and not just the private groups and teams as had been tradition in the past. In 2003, the ski area opened its doors to the public.

The newer ownership group has changed a bit over the years and is now majority controlled by the team listed to the side. The ski area is staffed with professional ski patrol and and lift attendants just as any other ski area, but with a summer like setting above 10,000 feet that can sometimes turn to winter at a moments notice. Please note, there is no lodge or warming hut facilities. You could call it backcountry skiing with a lift.

for more information go to www.beartoothbasin.com 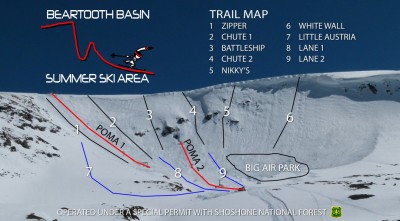