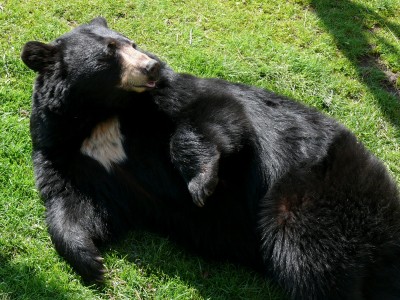 Bear Crashes Kid’s Party Through Skylight, Eats All the Cupcakes
By OutdoorAly

There is nothing worse than a bad behaving party guest. They show up unannounced, break stuff, then pull the old eat and run, it happens all the time. Only this time the guest was a black bear.

A family was celebrating their young son’s birthday party last Saturday in Juneau, Alaska when a bear came crashing through the skylight into their living room. The startled family ran into one of the bedrooms and shut the door, while the bear helped itself to the birthday cupcakes. The homeowner used bear spray to get the bear to leave the house.

According to the Juneau Empire:

The uninvited guest shimmied its way up onto the roof of a Starr Hill home, crashed through a skylight and landed in the middle of Alicia Bishop’s and Glenn Merrill’s living room, the homeowners say.

“I was literally in the room, and I heard this cracking,” Merrill said in an interview Tuesday, referring to the sound of the skylight’s two layers of plexiglass creaking under the bear’s weight. “And the next thing you know, there’s this bear that, I mean, literally, fell right from (the skylight). It was like three feet away from me.”…

“The bear walks over and puts its paws up on the table and starts licking his birthday cupcakes, and I’m just like, you’ve got to be kidding me,” said Bishop, 33, who was watching the spectacle from the kitchen behind closed glass doors.

For a link to the rest of the story from Juneau Empire click here.