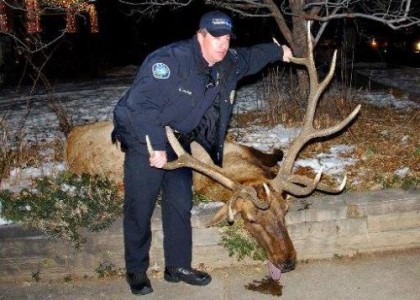 In early 2013, we reported on a very strange case out of Colorado. Many communities are dealing with an urban deer issue, and. one resident elk in Boulder, CO became a local celebrity, known as “Big Boy.” The 6×6 bull was seen all over town, grazing in front yards and enjoying crab apples. In January of 2013, Boulder Police officer Sam Carter alledgedly shot and killed “Big Boy” causing outrage across the entire community. Carter has been found guilty on 9 different counts that could mean up to 6 years in jail.

Carter argued that the elk had become dangerously domesticated and aggressive. But prosecutors told the jury the killing was a case of poaching by an officer who sought to use his position to get an illegal trophy mount.

After shooting the elk, prosecutors said, Carter called a friend and former officer to pick up the carcass and butcher it. They also said Carter later forged a tag to pass off the dead animal as road kill.

“They had no right to use their standing as police officers to poach this animal and lie about it,” Boulder County District Attorney Stan Garnett said.

Witnesses said the sight of the hulking animal was a highlight of countless hikes and jogs.

The charges against Carter included three felonies — forgery, tampering with evidence, and attempting to influence a public official. Misdemeanor counts against him included misconduct, illegal possession of a trophy elk, conspiracy to commit illegal possession of wildlife, unlawfully taking a big game animal out of season, and unlawful use of an electronic communication device to unlawfully take wildlife.