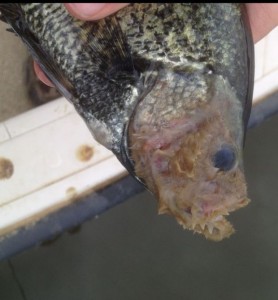 If you have noticed dead crappie washed up on the shore of the Tongue River Reservoir with a strange fungus on it, FWP says “it’s not ucommon during this period”.

Here is the full article via the Billings Gazette: Some crappie in Tongue River Reservoir are dying from secondary infections and floating to the surface with this scary looking fungus on their face.

Dead crappie found washed up on the beach at Tongue River Reservoir are dying from a fungus that takes advantage of stressed fish during the spawn.

“It’s not uncommon during this period,” said Mike Backes, fisheries manager for Fish, Wildlife and Parks in MilesCity.

He said the fish are probably more stressed than usual this spring because cool weather has extended the spawning period longer than normal as fish wait for the perfect water temperature. If a stressed fish loses its protective slime, fungus can take root and cause a secondary infection that will kill the fish.

Billings angler Jayce Dorman sent a photo of a fungus-headed crappie to the Montana Outdoor Radio Show asking what may have caused the growth and killed the fish.

“You’d see them on the water surface with this goopy stuff growing on their faces,” he told The Gazette.

The fish were spread out across the lake, washing up on shore, floating to the surface in bays and the flooded brush.

“We still caught a couple and they didn’t have that nasty stuff on them,” Dorman said. He had fished at the reservoir on Thursday.

Backes said he was at the reservoir last week as well and noticed groups of eight or more dead fish spread across the shoreline. Yet he said the crappie fishing in the evening on nights with no wind was excellent, with well over 100 fish hooked.

Hooking and releasing fish can also stress them, he noted.

(Article via the Billings Gazette)