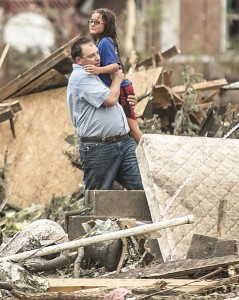 A girl who was pulled from the basement of her destroyed home in Pilger, Nebraska, on Monday.

A tornado just touched down in southeastern Montana yesterday, and that is scary enough to be in the vicinity of ONE funnel cloud.  Imagine being in the path of TWO tornadoes like the community of Pilger, Nebraska was the day before yesterday.  Unfortunately, the storms “leveled a ‘large portion’ of the village, which is home to around 350 people and located around 75 miles northwest of Omaha” after taking a direct hit, according to nbcnews.com.  Two fatalities were reported, along with several injuries.  (Click here for full story)

Please take all storm warnings seriously regardless of where you are.

Here’s some incredible footage captured of the two tornadoes: