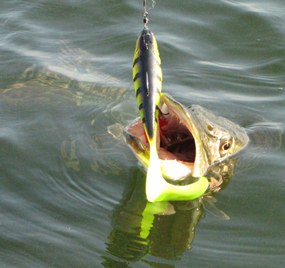 Fishing Facts – Part One
By angelamontana

There are several things you should know about fishing and the specific fish you’re fishing before you throw your line in the water, but you have most likely already done your homework if you’re already out there–or at least we hope you’re with somebody who can help you.  Other than the basics, outdoorlife.com posted a list of fishing facts that are all pretty interesting, but we wanted to share some of the best with you.  So, here is Part One of some pretty cool fishing facts you may or may not have known.

Check them out, and see if you have any facts to add to the list:

1. Saugers See in the Dark

Walleyes are known for their marble-like eyes, which let them see well in dim light. Their retina has a layer of reflective pigment, called the tapetum lucidum, that intensifies any light the eye receives. (It’s the same membrane that causes a cat’s eyes to glow yellow.) But the walleye’s close relative, the sauger, has even better night vision because the tapetum covers a much larger portion of its retinas.

Researchers studying walleye vision found that orange is the color most visible to walleyes, followed by yellow and yellow green. Surprisingly, red is the least visible color. No wonder you find so many orange and chartreuse lures in the tackle boxes of savvy walleye anglers.

Research has shown that a sudden decrease in light level triggers walleyes to bite. That explains why the fish usually turn on just as the sun is disappearing below the horizon and the light intensity is rapidly decreasing. It also accounts for the hot bite that starts when the dark clouds preceding a thunderstorm roll in.

4. Tiny Teeth, But What a Bite

Flathead catfish have a tooth pad consisting of hundreds of tiny, recurved teeth on the roof of their mouth. The pad helps them hold their prey securely, so it can’t wiggle around and escape. So if you’re inclined to stick your hand into a flathead’s mouth to dislodge your hook, forget it. You might pull your hand out minus the skin.

The very best time to catch a trophy walleye is five to seven weeks after the fish have completed spawning. That’s when the big females, famished after not having eaten for nearly two months, go on the prowl for food. And with the natural supply of baitfish at its annual low, they’re likely to hit almost anything you throw at them.

Ever wonder why the teeth of a pike or muskie easily shear your line, while those of an equally toothy walleye rarely do? In cross-section, the teeth of a walleye are round, but those of a pike oruskie have a razor-sharp edge. So don’t forget to tie on a wire leader when you’re chasing those esocids.

You might have noticed that some fish pulled from deep water can be released and will swim right back down, but others have trouble descending. That’s because some fish (physostomous species like trout) can “burp” air as they’re being pulled up, relieving the gas build-up in their swim bladders, while others (physoclistous species like walleyes) do not have a connection between the swim bladder and the gut, so their swim bladders expand, greatly increasing their buoyancy.

One of the least known but most effective baits for trout is the water worm, which is the larval form of the crane fly (those big, slow-moving bugs that look like giant mosquitoes). You can often find water worms by digging through the mud and sticks of a beaver dam on your favorite trout stream.

9. Latch on to the Right Leech

Leeches are one of the top baits for walleyes, but make sure you’re using the right leech species. Ribbon leeches, which have firm bodies and minimal suction, make excellent bait, but a walleye will turn up its nose at a horseleech or medicine leech, which have soft, squishy bodies and strong suction.

Although most anglers believe muskies are voracious feeders, consuming just about everything in sight, they’re actually much less aggressive than pike. Muskies are considerably more selective, and will examine your offering more closely. They’ll often follow your bait for a distance and then turn away at the last second. A pike, on the other hand, will attack practically any kind of lure or bait that passes its way.

Be sure to check back to montanaoutdoor.com for more fishing facts that just might be the key that help you catch something you’re after…