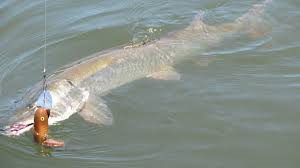 Test your fishing knowledge with Part 2 of some really cool fishing and fish facts via outdoorlife.com:

Would you believe that the gender of a baitfish could make a big difference in your fishing success? A male fathead minnow, which has a black head covered with spawning tubercles in spring, is much less effective than a female fathead, which is more silvery and apparently exudes a more attractive odor to walleyes, pike and other game fish.

Many anglers believe that pike lose their teeth in the summer and don’t bite. In fact, both pike and muskies continually shed old teeth and grow new ones. While it’s true that pike fishing often gets tough during the summer months, the poor bite is probably related to a glut of baitfish or the fact that pike often move into deeper, cooler water as the summer progresses.

Most of the stories of the muskie’s voracious feeding habits are myth, but there are some notable exceptions, including documented cases of muskies taking small swimming dogs and even attacking humans splashing around in the shallows! In one Minnesota lake, a cordoned-off swimming area had to be closed after a rogue muskie found its way inside the netting and bit a small boy.

Pike and muskies are both classified as cool-water fish, but there is a definite difference in the water temperature they prefer, especially among the larger members of each species. Pike more than 30 inches long favor water temperatures from 50 to 55 degrees, while muskies prefer temperatures of 67 to 72 degrees. Another big difference: Pike feed actively throughout the year and are a popular target of ice fishermen. Muskies feed much more sporadically in winter and are rarely caught by ice anglers.

Not sure if that big salmon you caught is a coho or a chinook? Just grab it around the base of the tail and try to lift it. If it slips through your fingers, it’s probably a coho; if it doesn’t, it’s a chinook. The bony structure of a chinook’s tail is much more rigid, making it easier to “tail” the fish.

7. Yummy! A Worm Inside Out

Channel cats love catalpa worms, which can be found on the leaves of catalpa trees from late spring through summer. To make a catalpa worm even more irresistible, cut off the head and then poke a matchstick through the body to turn the worm inside out. The extra scent helps cats find the bait more quickly.

Water dogs, which are the larval form of a tiger salamander, make good bait for bass, walleyes and pike. But once the young salamanders lose their gills and turn into adults, they don’t work nearly as well. To prevent water dogs intended for bait from developing into adults, keep them refrigerated in water at a temperature of no more than 50 degrees.

9. Mud Cats in Name Only

Flatheads are often called mud cats, giving anglers the impression that they scavenge dead food items off the bottom. But flatheads are more apt to eat live fish than any other catfish species. Channel cats are most likely to consume dead, stinky food (and bait) and blue cats are intermediate in their food preference.

Trout are the only kind of fish with an adipose fin, right? Wrong. Several other fish species, including catfish, bullheads, madtoms, smelt, ciscoes and whitefish, also have an adipose fin (the small fin on the back just in front of the tail).