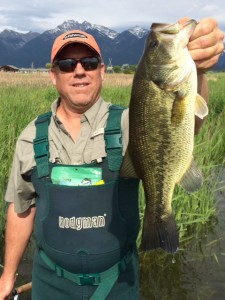 Brandt Hamernick from Missoula sent in this picture of a 17 inch largemouth bass he caught and released on Ninepipe Reservoir Saturday. He estimated it weighed about 4 pounds.

Ninepipe Reservoir is located about 50 miles north of Missoula on Hwy 93, and was created in 1912 as for irrigation to the surrounding Confederated Salish and Kootenai Reservation lands. The first lands of the WMA were purchased in 1953 and an active period of acquisition occured from 1955 to 1962.

The Ninepipe WMA consists of approximately 3,800 acres surrounding the Ninepipe National Wildlife Refuge. At approximately 3,000 feet above sea level, the property consists of rolling, open grasslands and numerous prarie potholes, or kettle ponds. There are remnants of native rough fescue grasslands but today, the area vegetation is mostly introduced grasses and croplands

Fishing is allowed on both refuges in accordance with applicable State and Tribal regulations. Yellow perch and largemouth bass at Ninepipe, and rainbow trout at Pablo often furnish excellent fishing. Ice fishing is permitted after the waterfowl hunting season has ended. Boats or floatation devices are not permitted on either reservoir and a tribal recreation permit is required.