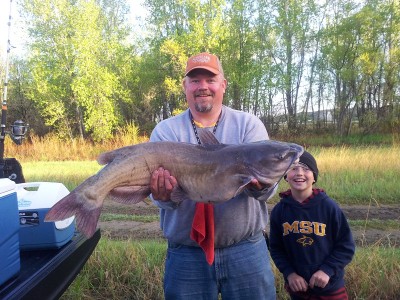 We recently received quite a fishing story from one of our Montana Outdoor Radio Show listeners, Dennis Black of Great Falls, and we just had to share it! Check out the awesome pictures below, too! Thank you for sharing, Dennis!

My best friend Mike and I both coach track and field at Great Falls High School and started our weekend at the Eastern AA Divisional Track Meet in Butte. Following the competition on Saturday, we hurried back to Great Falls with plans on taking my two sons on a camping/fishing excursion at the confluence of the Marias and Missouri Rivers near Loma. We didn’t arrive until late Saturday evening, and once we were able to secure a location to set up the camper, we decided to give the late evening fishing a go. Big Mike and I are affectionately referred to as the “Bogart Brothers” by our peers with regards to fishing. I am “Bogart #1” and Mike is “Bogart #2” and together we have a knack for catching a lot of fish…

Anyway, we got lines in the water for the kids and the bite was hot right off the bat. We landed several carp, shortnose redhorse suckers and goldeye that evening. My eldest son, Maverick (age 10) bagged the first catfish of the trip, a pound-and-a-half specimen which greatly enlightened his spirit. Around 10:30 pm, the boys got tuckered out and I went back to the camper with them for bed. Big Mike proceeded to land another half dozen cats between 1.5 and 3.5 pounds before calling it a night.

The following morning I got up a little after 4:00 am and sat outside enjoying the morning calm. Around 5:00 am I woke my youngest son, Memphis (age 8), for a little fishing. His brother and Mike both were unstirrable so my wee lad and I headed down to the river together. Within minutes Memphis pulled in a 6 pound carp and immediately followed that up with a goldeye. As I was re-baiting his rod, the other one started to bounce ever so slightly. Memphis picked up the rod and waited for a “bigger bite”… Once he saw the line moving downstream, he pulled back and the fight was on. He hollered over that he had a big one on. I assumed that he hooked into another carp, but then saw the fish roll and got a positive ID as a good channel cat.

Memphis was all grin when I told him he had a big catfish on his line. With the murkiness of the water, I estimated the fish to be in the 8 to 9 pound range, but when I couldn’t get the fish to fit in the net, I realized it was much bigger. We got the fish on the bank at a little after 6:00 am and honestly, I think I was more surprised by the size of this fish then my son was. His first response was “Dad! Is that Catfish Hunter?” I said “Yes, son, I believe it is.”

Needless to say, once we woke the other two members of our party up, the fishing was on. Maverick caught his first ever shovelnose sturgeon, a 4.5 pounder. The boys had a positively grand ole time. A truly Epic Weekend. With Memphis’s birthday coming up in August, I have ordered up a reproduction blank so I can make a mount of his trophy cat, a 34” x 23”, 25-pound monster. 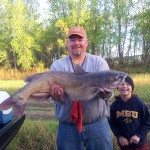 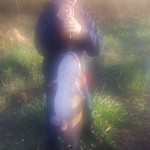 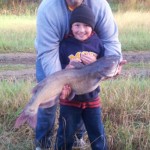 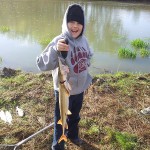 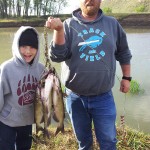 (Story and photos via Dennis Black)