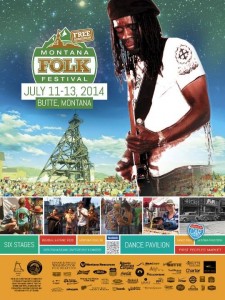 Montana Folk Festival in Butte This Weekend
By OutdoorAly

Looking for a last minute FREE outdoor entertainment this weekend? Butte is hosting its annual Montana Folk Festival. The festival site will be located adjacent to, and partially within, the fascinating Uptown Butte Historic District. A mix of open air and tented sites will provide a variety of performance venues ranging from intimate stages to amphitheater size.

The Amphitheater Stage, which offers a panoramic view of Butte and the surrounding mountains, is being developed on the site of the historic Original Mineyard, with its dramatic deep shaft mine headframe that is a remnant of Butte’s days as an underground copper mining center. Saturdays entertainment starts and noon and goes well into the evening, and starts back up at noon Sunday. For a link to the full schedule of events over the weekend, click here.

Here is a little of what will be going on: