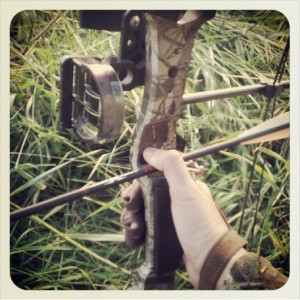 The Big Change: From Fingers to a Release…
By angelamontana

For the last decade that I have been shooting and hunting with a compound bow, I have always shot with my fingers, rather than a release.  When I first learned how to shoot a bow back in my early 20’s, I wasn’t given the option to use a release, nor was I ever even told about them, so I never even knew they existed for a good amount of time.  It helped that the first bow I was given as a gift was a 35-pounder, as pulling the string back wasn’t a chore.  After flinging my first arrow–I was hooked.

As time went on, I noticed that some people were using some odd wrist contraptions while shooting their bows, and the craziest thing was they were pulling a trigger when taking their shots!  A trigger?  Why shoot a bow if you’re pulling a trigger?  Why not shoot a rifle?  (Yes, that was really my thought at first)  I just couldn’t figure it out…so, I kept shooting with my fingers, still accurately, sporting a new Jennings compound bow, setting the draw weight to a comfortable, for me, 54 pounds.  My glove worked great for me, so I wasn’t about to try and fix something that wasn’t broken.

Years went by, and I got even more into bowhunting, I took up bowfishing, too, and loved (and still love)  it.  I have helped eliminate, from Canyon Ferry, a considerable amount of carp over the last decade, and I even bought my boyfriend his first bow, as he was a rifle-only hunter up until we met. I was surprised when he bought a release, going against my suggestion of using fingers.  But, then again, his Parker bow is set to a draw weight of 75# or more, so I realized there was a huge difference between pulling back 54 pounds with fingers and 75 pounds.  I rolled my eyes and ignored the prodding to get a release myself, shuddering at the thought of not having my trusty glove around.  It had, afterall, been with me from the very beginning. 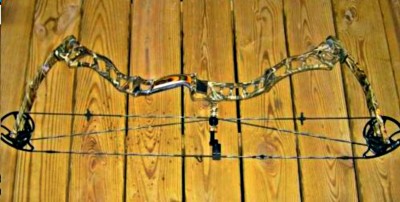 Just recently, somebody I know told me that he went 25 years shooting with fingers, and within the last few years, he switched over–and he couldn’t believe he waited that long.  He assured me that he was as adamant as I was about using fingers to shoot, but after using a release a few times while out hunting, he would never go back to using fingers.  Interestingly enough, after all of the people in my life that tried to convince me to use a release gave up, something about this one comment changed my mind after I bought my most recently purchased bow (a Bowtech 101st Airborne).  So, I decided to give a release a shot (pardon the pun).  What did I have to lose?  If I used a release for one whole day and just didn’t like it, I could always switch back to fingers.  So, I headed out and bought my first release yesterday.  This purchase inspired me to compile a list of reasons why I am switching from fingers to a release after standing my ground for so many years on not using a release.  Here is what I came up with:

I will find out first-hand if the above benefits will make retiring my glove worth the transition.  I am also interested in doing everything I can to make my bow shoot the most accurately and efficiently.  A new bow, a new method of release and a new season.  I’m ready to start shooting!

Have you ever shot a compound bow with your fingers?  If so, do you still, and why or why not?