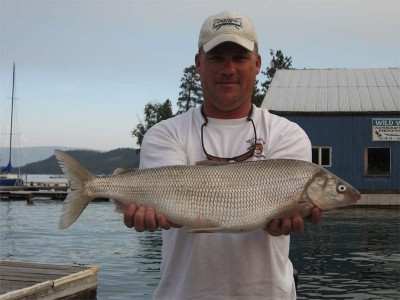 Former Region One Bioligist Jim Vashro, from Kalispell, gave his input on this potential whitefish bite on Flathead Lake, and here it is:

Hey, Captain. I have to say I’m enjoying retirement. I’ve already been fishing 3 times more than all of last year. And I scored with an either-sex elk tag and elk B tag in the Breaks along with an antelope tag. I’m going to enjoy having the time to hunt.

I saw your column 7/24. Folks have been asking me about the lake whitefish too. I was hopeful but it looks gloomier every day. The whole bite seems to key off young-of-the-year perch. The perch life cycle is more complex than we realized, I’m surprised we ever got a good hatch. Strong spring cold fronts seem to kill the hatch. If you remember, several years ago we had a mild spring and I predicted a whitefish bite that never materialized. So much for what little reputation I had. This is what I think happened.

I think conditions were good for a strong perch hatch this spring. But the rest of the story was strong run-off and cold weather in June. The Flathead outflow was running more than double all of June, it’s still 30% higher than normal. Perch fry are weak swimmers, I think a lot get sucked downstream in high flow years. That still leaves Big Arm Bay and the upper lake. Unfortunately the runoff and cold weather kept the lake cloudy and cold most of June. That delays and reduces zooplankton development that perch fry need to eat. I think a lot of them starve to death, they’re so tiny (<1/2”) you’ll never see them. I haven’t seen any bait balls forming and I just talked to outfitter Mike Howe and he isn’t seeing bait balls either. I was up on Woods Bay Point 2 weeks ago and didn’t see anything.

The bite usually develops in Big Arm Bay first because it warms quicker. But it’s not unusual to have some lake whitefish around anyway. Hexagenia mayflies just hatched and there are always some perch fry to be had. But I haven’t heard of the big schools of perch that black out your fish finder and bring in hordes of whitefish. And they’re usually going by now.

If someone really wants lake whitefish, Echo Lake has a decent population. Fish the main basin at 35’-40’ with the usual gear. Go early because the lake gets busy with water skiiers. You can often get 4-6 whitefish in a morning. There are some kokanee there too.