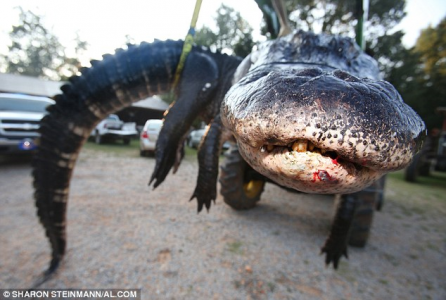 Family Bags a Deer and a Record Gator Simultaneously
By angelamontana

“It may not be deer season, but one family of hunters inadvertently bagged a doe when they took down this 1,000+ pound gator.” (via outdoorhub.com)

When Ken Owens, who owns a taxidermy shop in Autaugaville, Alabama, opened up Alabama’s largest recorded gator ever taken by harvest, and still possibly the largest gator ever taken by harvest in the world, “he saw a pair of ears”, according to a recent post on outdoorhub.com.  After pulling on the ears, he ended up with an approximate three year-old doe (age estimated via its lower jawbone) that was still “fully intact, yet deteriorated”.

Who knew that when you’re gator hunting in Alabama, you can bag more than one animal with one harvest.  It turns out that there were other digested animals found in the gator’s large belly, such as squirrels, birds and even evidence of a cow.

So, congratulations to the Stokes family for their record gator, and all of the animals that came along with it.

Here are some photos via dailymail.co.uk of the gator: 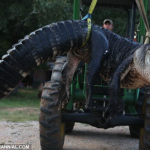 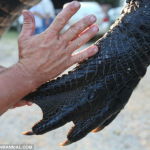 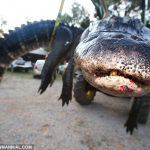