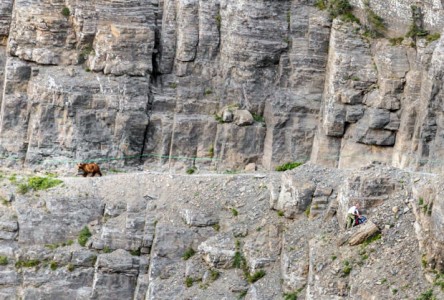 It was captured in a photo, which of course is worth a thousand words. A grizzly bear was trodding along the Highline Trail in Glacier National Park, a notoriously narrow, steep route, when it came around a bend in the trail meeting a equally surprised hiker coming opposite direction on the trail.

According to a recent Missoulian article Kalispell photographer Philip Granrud witnessed the encounter, which took place earlier this week in the park, and took the picture from a distance of 200 to 300 yards.

“It was taken 15 seconds after they spooked each other,” Granrud says. “You could see the bear jump, and you could almost hear the guy go, ‘Oh, crap.’ Then they stood still, watching each other. I could see the guy look over his shoulder like he was thinking about going back, but that really wasn’t a choice.” 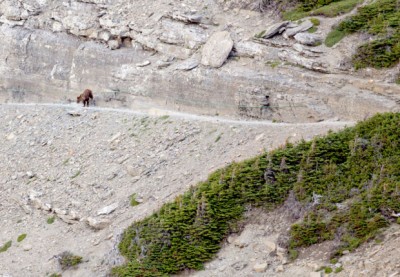 To the right of the bear, at about the only place on that section where a person could leave the trail without plummeting to his or her death, is a man in a white shirt, hiding behind a boulder.

Instead, Granrud says, the man “scrambled” over the cliff, down a tenuously small and steep rockslide, and took refuge behind a boulder.

He’s about 10 feet below the trail – and approximately 15 stories above Going-to-the-Sun Highway.