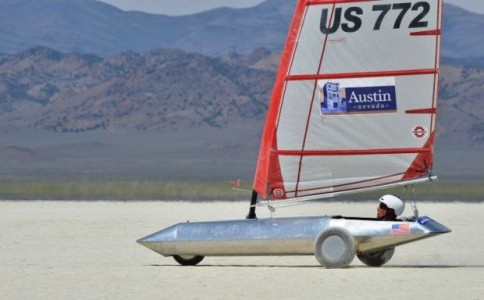 Typically you think of most sailing taking place on a body of water such as Flathead Lake, but one local Montanan from Lakeside took his sails to the desert and landed himself a world record.

John Eisenlohr, 51, of Lakeside, was one such competitor, and now holds the title of world champion in the 5.6 mini class, during which he piloted a self-made land yacht that, according to the rules, must fit in a 5.6-meter continuous loop of rope.

According to a recent Flathead Beacon article:

Sailing is part of Eisenlohr’s heritage, with weekend jaunts to the Southern California deserts for landsailing when he was a kid and his father, Bill Eisenlohr, being a celebrated boat builder.

In fact, there’s hardly any surface that Eisenlohr can’t or won’t sail. In the winter, he trades the wheels on his land yacht for ice runners, and he glides across the frozen landscape in Northwest Montana.