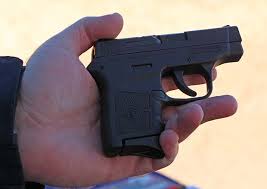 I recently had the opportunity to try the new Smith & Wesson M&P Bodyguard 380 chambered in .380 Auto. I fired an original Bodyguard 380 a couple of years back; I liked that gun and I like the new one. The M&P Bodyguard 380 isn’t really much different from the original, they really are the same gun. The only difference is the roll mark on the slide and the fact that the integral Insight® laser is no longer standard equipment. The new gun is less expensive than the original (suggested retail of $379), but there is also an optional model that now comes with a Crimson Trace® integral laser. The Crimson Trace® laser equipped model has a suggested retail of $449; $30 more than the old Insight® laser equipped gun. 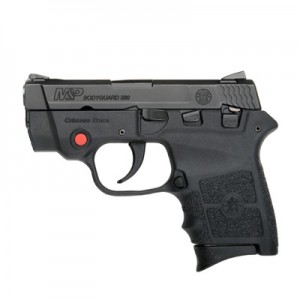 The controls of the new M&P 380 are identical to the old gun with one difference. The control buttons for the laser are red on the new gun; they were black on the old one. The little pistol is 5.25 inches long, about 4 inches high, and ¾ inches wide. The laser equipped gun weighs 12.3 ounces and the non-laser gun, 12 ounces. The integral laser control buttons sit in the frame in front of the trigger guard. The pistol comes with 2 six round magazines, one with a finger extension and the other with a flat base, giving the loaded gun 7 shot capacity. The frame is polymer, the slide and the 2.75 inch barrel are stainless steel. The slide is finished in matte black. The sights, both front and rear, are stainless steel and drift adjustable, and like the slide are finished in matte black. The gun has a takedown lever, slide lock, manual safety, and mag release, all located in the traditional positions. The pistol is a double action only and is hammer fired. More on that in a moment. 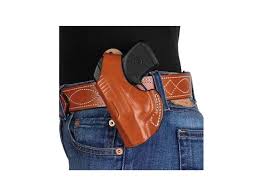 While I wasn’t able to do an extensive test on the M&P 380, shooting it reminded me just how great a concealed carry gun this little pistol is. With either the extended mag or the flat base mag in place, the gun is very controllable. Unlike many of the other small 380s on the market, this one doesn’t seem to be jumping out of the shooter’s hand when fired, and perceived recoil is much less than other small guns I have tried. The M&P 380 is a pleasure to shoot, an important factor to consider in a CWP pistol. Simply put, if your concealed carry gun is painful to shoot, you won’t practice as often as you need to. The sights on this gun are terrific for such a small pistol. My vision has really deteriorated over the years and the itsy-bitsy bumps that pass for sights on some small pistols are literally worthless for me. Not so with the M&P 380; I was able to pick up the sights and shoot some very accurate double taps at 10 yards. Operating the laser is simple; just push the button with either your trigger finger or offhand thumb.

The trigger on this gun is a bit long, but the pull is very consistent and smooth, much like a good revolver. Being a DAO hammer fired gun, it has second strike capability. This means that if the gun misfires, just press the trigger again; most often a second strike to the primer will result in the cartridge firing. While I had no malfunctions when I shot the gun, I have found that misfires seem to be more common on small pistols. 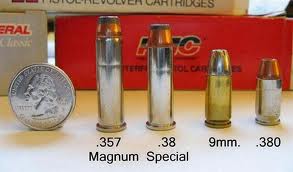 Over the years, many “experts” pooh-poohed the .380 Auto (also known as the 9MM Kurz) as being too underpowered and anemic to be a good defensive pistol round. In the last 20 years, huge improvements in bullet design and propellants have given many of the smaller calibers much more punch. Ammunition such as Hornady’s Critical Defense® .380 Auto offer a very effective and viable self-defense round.

The M&P Bodyguard 380 is a very concealable, easy to shoot, affordable gun that fires an adequate defensive cartridge. Remember Jeff Cooper’s adage, “…the best gun for a gunfight is the one you have with you.”