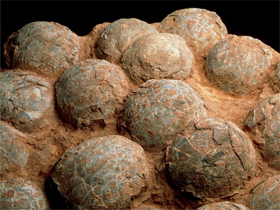 Dinosaur Eggs in Montana? Yes- at Egg Mountain in 1983!
By angelamontana

“At Egg Mountain near Choteau, dinosaur eggs have been discovered supporting the theory some dinosaurs were more like mammals and birds than like reptiles.” (via legendsofamerica.com)

What do you think about that?

“Egg Mountain, located along the Rocky Mountain Front south of Choteau, is the site of the world’s first discovery of dinosaur embryos by Museum of the Rockies paleontologists September 14, 1983. Egg Mountain is one of 16 places in Montana that a team of geologists, paleontologists and Montana historians have identified as geological wonders. An interpretive sign between mile posts 57 and 58 on U.S. Highway 287, provides travelers information about Egg Mountain.

The site where the Maiasaura bones were found was named Egg Mountain, and has since yielded the largest cache of dinosaur eggs, embryos, and baby skeletons found in the Western Hemisphere. The site has also yielded one of the largest concentrations of adult dinosaur skeletons found in the world. Paleontologists have interpreted this accumulation as a gigantic herd of Maiasaura that died in a catastrophic event, possibly resulting from a volcanic eruption or a hurricane.

Besides Maiasaura, a little meat-eating dinosaur named Troodon also nested at the Egg Mountain site. Its eggs indicate that they were brooded similar to birds, by direct contact of the parent. About 76 million years ago, when Maiasaura and Troodon lived in this area, the Rocky Mountains were just beginning to form to the west, and a shallow ocean existed 300 miles to the east. The dinosaurs nested near lakes and streams on a fern covered coastal plain. Maiasaura is Montana’s state fossil.

For more information about the Montana Dinosaur Trail go to www.mtdinotrail.org.” (via visitmt.com)