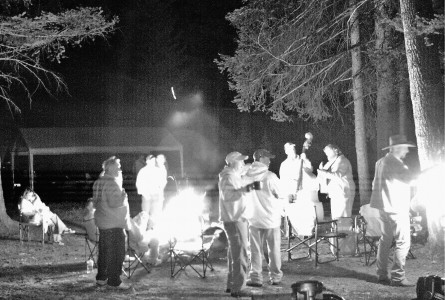 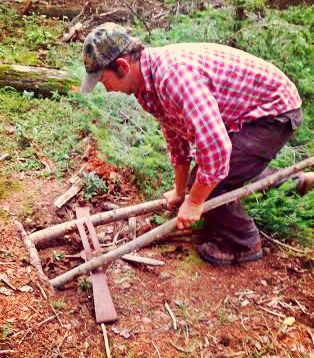 MTA President, Toby Walrath, shown here attempting to set a trap that was later determined to be a novelty trap that was unsettable

Approximately 30-40 trappers and supporters of trapping attended the Bitterroot Area Trappers Appreciation Camp-Out this past weekend at Meadow Creek, up the East Fork, on August 30th-31st.  The event gained the Montana Trappers Association new memberships and included information on trapping and upcoming MTA events, among other things.

Bitterroot valley resident and MTA member, Brian Gartner, did a fantastic job organizing the event which included complimentary burgers, chips, chili and other sides brought by attendees (potluck style), along with sodas, water and free beer from a keg for the adults.  There was also live bluegrass music performed by a local band and a pistol shooting competition, which was won by MTA member, Wade Lewis.  There was also a trap-setting contest and even some just-for-fun arm wrestling competitions.  Some trappers, such as MTA member Bill Shope, brought their bows and practiced shooting in preparation for next week’s archery season opener.  There was even some dancing, a lot of trapping talk and just a really good time.

MTA members Bill Shope, and Brian Gartner fire up the grill while Gerry Behling and his wife Vickie offer their assistance.

Thank you to all of the attendees and campers who showed their support!  Special thanks to Brian Gartner’s efforts in organizing and making this event successful.  We look forward to next year and hope to see even more new faces! 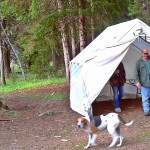 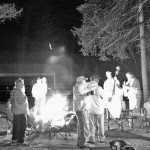 The band was playing by the fire, and the party was hoppin! 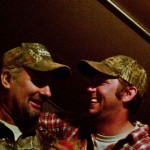 MTA member, Bruce Hover, and MTA President, Toby Walrath, were all smiles while catching up at the camp-out!