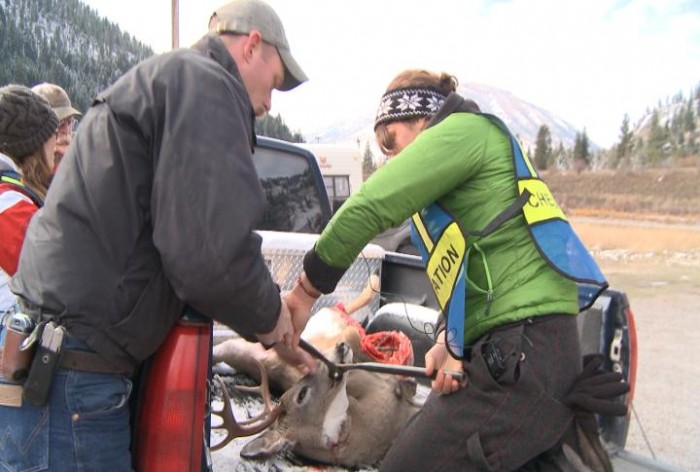 Opening weekend of the 2014 general rifle season saw more hunters pass through the three check stations in Montana Fish, Wildlife & Parks (FWP) Region 2 than in the 2012 or 2013 openers, with more big game animals harvested than in last season’s opener.

All told, 2,775 hunters checked 88 elk, 18 mule deer, 71 white-tailed deer, 3 bighorn sheep, 1 black bear, 1 moose and 1 wolf—a total harvest of 183 animals—through check stations operated at Anaconda, Bonner and Darby on Saturday and Sunday, compared with 2,424 hunters and 171 animals in 2013.  Hunter numbers were 5 percent above the opening weekend, four-year average since opening day changed to Saturday from Sunday in 2010, but harvest was 17 percent below the four-year average.

At the Darby Check Station, 1,077 hunters harvested 62 elk, 24 white-tailed deer and 10 mule deer, up in all categories from the opening weekend last season.  Hunter numbers at Darby were 10 percent above the four-year average, and whitetail harvest was 74 percent higher than average. FWP speculates that both increases might be explained by whitetail hunters making an effort to get in the field early this season because of the new regulation that restricts harvest to bucks-only in the Bitterroot, beginning on November 3.  Elk harvest through Darby was 17 percent below the four-year average and mule deer harvest was down 9 percent from the average.

Bonner Check Station again led the region in white-tailed deer harvest, with 47 checked on the opening weekend—up from 39 taken at this time last season, but still 10 percent below the four-year average.  In addition, 1,215 hunters checked 9 elk, 5 mule deer and 1 bighorn sheep through the Bonner station.  Hunter numbers were barely 2 percent above the four-year average, but elk and mule deer harvest were the lowest for opening weekend since at least 1997—according to the figures readily at hand.  FWP surmises that mild weather, along with restrictive hunting regulations intended to build elk and mule deer populations in much of the Blackfoot account for the low harvests through Bonner so far.

FWP did not operate a check station at Fish Creek on opening weekend this season, due to a temporary vacancy in the Missoula-based biologist position. 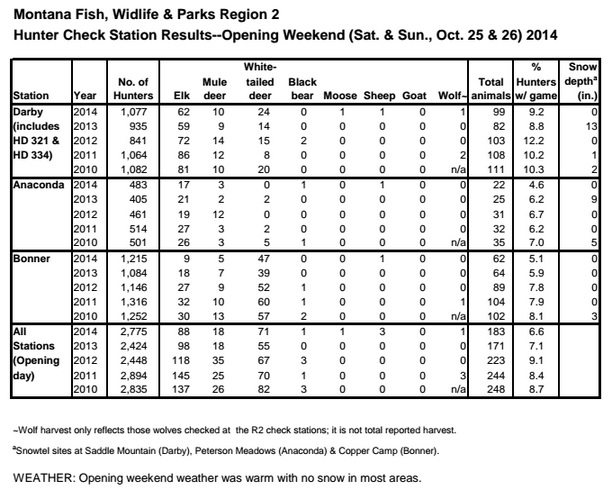