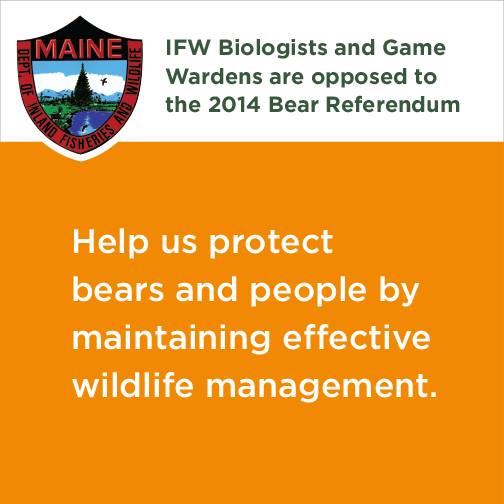 While it is uncertain whether this ruling will set a precedent for Wildlife Agencies across the U.S. to speak out against damaging Animal Rights Ballot initiatives one thing is for certain:  The Maine Department of Inland Fisheries and Wildlife can and will take a stand to defend the necessary wildlife management practices which include hunting, trapping and fishing.

In a recent ruling Maine Maine Superior Court Justice Joyce Wheeler denied a request for a temporary restraining order filed by the ad-hoc group Mainers for Fair Bear Hunting and Katie Hansberry, an employee of the animal-rights group Humane Society of the United States according to the United States Sportsman’s Alliance.

Justice Joyce Wheeler sent a clear  message to the citizens of Maine when she wrote in her final ruling on October 22, 2014;

“Restricting speech on contested public issues is directly contrary to the public interest, which favors a robust and dynamic public discourse. It is the voters, not the Plaintiffs or the courts, to assess the relative merits of conflicting speech”…“DIFW’s advocacy activities are based on their experience and expertise and relate to initiatives that it perceives would have serious consequences for their effective management of Maine’s bear population.”

The Montana Fish Wildlife & Parks will not support or oppose wildlife ballot initiatives at this time.

For more information about this ruling visit: