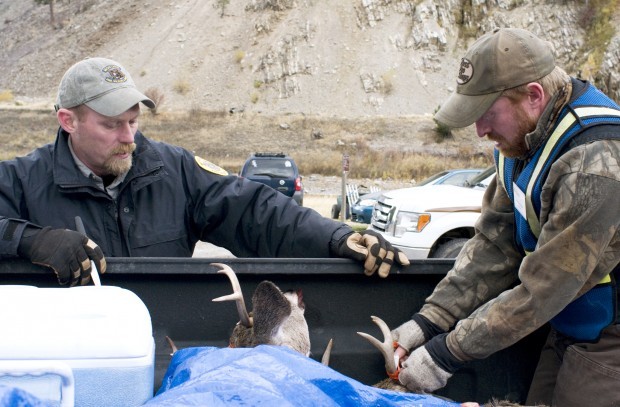 “Opening weekend varies every year,” says Brent Lonner, FWP wildlife biologist “some years more game is taken than other years with weather at times playing a key role early in the season. Likely major contributing factors this year were the mild and windy weather and fewer antlerless deer and elk licenses available in the southern Rocky Mountain Front area. ”

Elk hunters this year brought in six animals (four bulls and two cows) compared to the last four years’ average (2010 through 2013) when 22 elk (12 bulls, nine cows and one calf) were checked in.

Mule deer numbers this year at the check station came to two bucks; for the past four years hunters averaged 15 mulies (nine bucks, five does and one fawn).

With whitetails, this year’s opening weekend count in Augusta was two (one buck and one doe) while the past four years average was 13 whitetails (seven bucks, five does and one fawn).

Overall hunter participation was slightly below the four-year opening weekend average: 247 hunters checked through Augusta this year compared to an average of 258 hunters from 2010 through 2013. Before 2010, opening weekend of the general big game season was only Sunday.