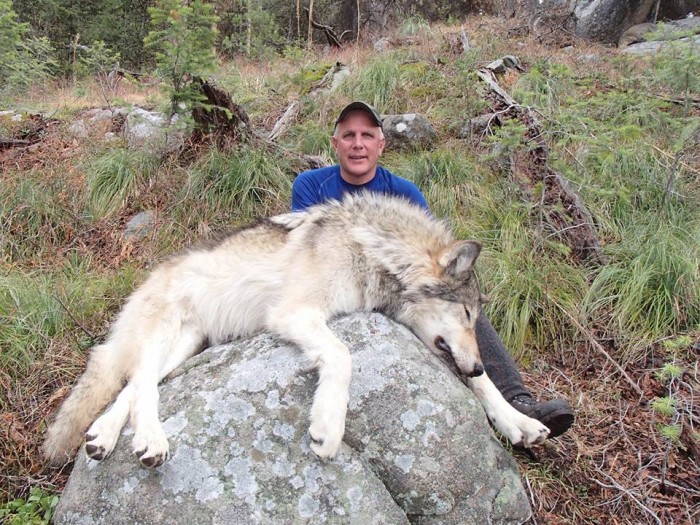 Opening weekend of rifle season  was a success for Tony Jones, a Bitterroot valley resident and an avid hunter.  Jones has had lot of successful hunts over the years, just search his name on montanaoutdoor.com to check out a few of them, and his most recent success is definitely creating a buzz of high fives and “way to go” comments around town and on the internet.

Here is the story in his words (via predatormastersforum.com):

Saturday was opening day for the general rifle season here in Montana. My son has been living out of state the past few years but had moved back this past spring. We have hunted together since he was old enough to go. He would tag along the years before he was old enough.

It was a typical opening weekend, mild temps and lots of hunters. We headed to one of our old spots that had been good to us on opening day. We had some rain this past week so at least going was quiet.

We hunted the way we use to, staying together till about mid morning and he headed back to get the Jeep and drive to a spot and pick me up. There was not much elk sign, but it was a beautiful day and the start of a long season.

Shortly after splitting I heard what I thought was a wolf howl. Now I have heard a lot of wolves howl but this one sounded a bit hokey. At first I thought it was a guy. I sat tight till I heard it again but still wasn’t convinced it was real. I thought what the heck and voice howled back. Sure enough I got an answer, so I howled again trying to imitate the howl. This time the whole canyon lit up. I could pick out at least 4 different howls above me and close.

The wind was perfect, steady down hill, so I howled again and moved slightly so I had a good view. I knew if they came in they would try and get down wind and I wanted to make sure I had both routes covered.

One more howl and I could hear them coming on the run. At about 70 yards, I could see them flashing through the Lodgepole. I had a good opening to the left and as luck would have it that’s where they were headed trying to get down wind. I could see two silvers coming hard. When they hit the open spot I howled again to try and stop them. It worked. The first one was behind a small tree, but the second was broadside at 50 yards. Up went the rifle and off went the shot. The wolf went down immediately and never twitched. A Triple Shock through the shoulders.

I could not believe what just happened. I have been hunting wolves since they got delisted and have had close calls but never a shot. I chalked it up to having my son back as a good luck charm.

I howled right after the shot and for about 30 minutes with my wolf laying there the rest of the pack howled back at me. Very cool. They moved back up the hill and I could tell there were 4 left. One of the best days I have had in the field. I hiked out, got my son and went back for pics. We decided to pack the wolf out whole so we could get it on a scale. 3 hours later we were headed home, all smiles.

Congratulations, Tony, for howling in such an awesome 81-pound East Fork wolf!  Thank you so much for all you do for Montana’s wildlife.  Beautiful!