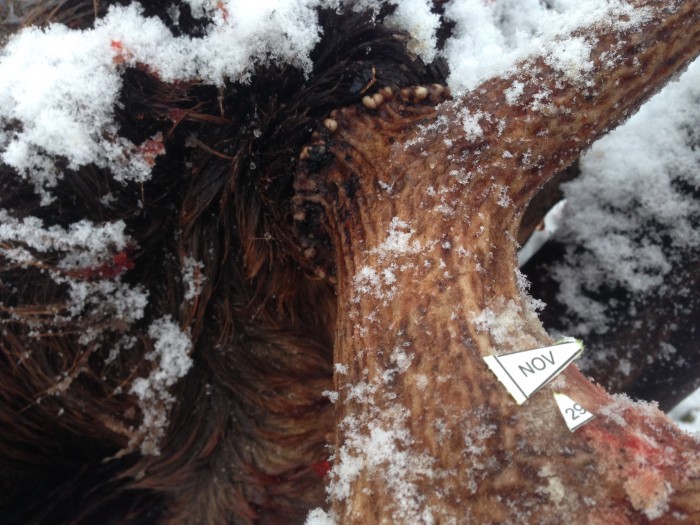 It’s The Last Day Of General Season ! Get Out There!
By Toby Trigger

After hunting for three months and not tagging an elk I’ll admit I wasn’t feeling very optimistic yesterday when I headed out the door at 0’dark thirty.  I’ve seen more elk this year than any in recent memory but things just never worked out.

Like the bull I spotted while eating lunch with a friend.  I pointed to the bull and whispered only to hear a push-button call mew as Travis leaned forward.  That bull ran right in and we weren’t ready.

On another archery season day I called in a bull to twenty yards while bugling to a bull in front of me – trouble was, the bull at twenty yards was standing behind me and I didn’t see or hear him coming because I was talking to another bull.

Or the bull I had in my scope at fifty yards and instead of waiting for him to step forward I forced the issue and stepped to the left o get his vitals in my scope – he left in a hurry.

Then there was the bull I had at 40 yards for ten minutes with no brow tines.  Then came the lull where it seems like the bulls disappear for a few weeks. Miles of trekking had left me sore and tired, something I expect – but I wasn’t seeing many elk and it was wearing on me.

I drove to a trail head yesterday (Saturday) and talked myself into hiking straight up the mountain to a saddle where I hoped the elk would cross.  I was thinking that if I didn’t put my tag on an elk today I would accept my fate and be grateful for all the face time I had with all the wildlife this season. It was my last available day to hunt.  I was going all-in. The kind of all-in that disregards the pain from hiking miles in deep snow and doesn’t pay heed to winter storm warnings and gusting winds.

As I reached the saddle it was snowing so hard that I couldn’t see across it and the wind was howling.  Just then I heard something to my left.  At 50 yards four branch antlered bulls walked in a line paralleling me  and angling toward me in the wide open.  The image is seared into my  mind and I can’t shake it loose.  It was the kind of moment we all live for as hunters.  A moment I never would have had sitting at home.

The snow made to hard for them to see me just as it did for me o see them, until they were close.  I picked one bull and fired my .338.  The bull dropped and slid across the trail in front of me.  The other three bulls split up and stopped at less than 200 yards.  After weeks of not being able to put my tag on a bull elk, I now had a bull down and three others standing in range.  God has a sense of humor! 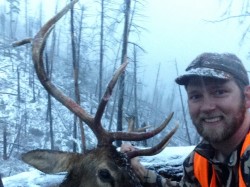 If you’re sitting at home right now or sitting in your truck trying to get the motivation to hike up a mountain, just remember that today is the last chance you’ll  have to push yourself after elk until next year.  Go for it! Today may be the day that you’ve been waiting for all year and it just might be your best day ever.  Good Luck!