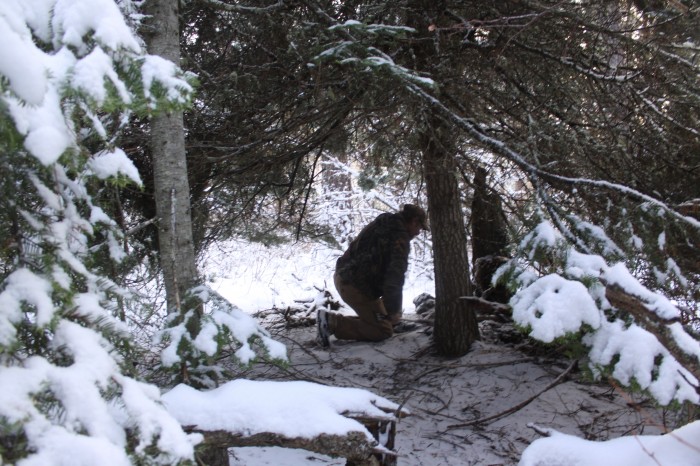 A Montana Trappers Day on the Line
By Toby Trigger

A chapter from the book; “Wild Pride Montana A Trappers Journey” depicting the outdoor lifestyle of todays Trappers.

The morning sun timidly peered over the mountains casting soft shadows on snow capped peaks. A steamy river flowed through willows, water cold and dark. A herd of elk chewed on wild grasses long ago buried under the white blanket of winter. Snow shoes pressed into the soft flakes making an almost imperceptible whooshing sound with every step.

Around the next bend of the creek came the first fur of the day. A muskrat held in a body gripping trap that had been placed on a small run trickling over a beaver dam, just wide enough for the small trap. He removed his pack before picking up the animal and admiring the thick fur. He always thought that muskrats had the most beautiful fur in contradiction to their name. The ‘rat was removed and placed in his pack. The trap re-set. A dozen more sets like this remained on this stretch of creek. Two more held muskrats and the last a mink. Mink were always a welcomed addition and in midwinter have the sleekest of fur.

Up the bank and through a stand of conifers, several traps were waiting. A dozen sets made for marten, bobcat and fox held nothing as the faint snowshoe trail was again pressed with the woven imprints of rawhide and bended wood. The trail dodged snow laden branches and led him around downed trees. The woods were quiet and a white tailed deer bolted at the sight of the figure moving through the forest. She blew a warning sound sending three others running through the boughs of fir and pine. He thought about his freezer and the meat from the elk that filled it. Meat stores were full and hunting season over.   “You’ve no reason to worry deer”, he said to himself.

The last three checks had yielded nothing on this line except frozen traps and the experience of hiking though the forests in winter. But today was one of the good days. The kind of day he lived for. As he snow-shoed along the edge of an old beaver flow it changed from thick trees to willows and alders. Red fox tracks made since the snow yesterday followed the edge of nearly impenetrable forest and it’s more open reprieve.

He knew there was a chance the next set would hold that fox. His steps quickened in anticipation, snow and heavy pack quickly reminded him to keep it slow and not over heat. Red fur glanced through the brush in the very place he had set a trap while first laying out this trap line three weeks ago. This was the second fox caught at this set since that time re-affirming his reasons for placing it there. The trap had done its job even in the wintery conditions holding the fox by the foot, its bright red fur in stark contrast to the world of white.

A sudden and accurate blast reported from his .22 caliber pistol just before he knelt down to remove the winter prime fox from the trap and laid it next to him. The set was remade in minutes and he contemplated skinning the animal right then. He decided instead to press on knowing darkness would surround him in a few hours.

Another mile of trail and four sets later he had two marten added to his basket. The marten had also run along the edge and were lured to small boxes made of wood and guarded with the same type of trap used to capture and quickly kill the muskrats he now carried on his back. The boxes were wired to ever-green branches five feet off the ground. Weeks of snow made them almost invisible to the human eye but the essence of skunk and fresh beaver meat continued to lure the martens in. So many times marten had approached the boxes and not committed to the bait. Today was different, he had two. “A great day for marten trapping” he thought to himself.

Down a hill and another half mile walk through willows and grass and snow laid five ponds separated by short and narrow creeks. Two of them had lodges made of mud and bark-less sticks with long brushy feed piles extended out into deep water. The brush was frozen into the ice and thin branches poked out even above the snow. “Winter beaver are difficult to catch.” he thought as he chopped another hole in the ice and peered into the dark water. Except for occasional forays they only move from sleeping quarters to feed piles and back again when the mercury drops and so far his beaver traps were empty.

He continued to snowshoe through the thick alders occasionally tangling in the branches until he stood on the bank of the narrow creek flowing between two ponds created by his favorite animal in the world. It was winter, late December and the snow was piling up. The moon was bright and this was the last check of the day. Wearing a heavy wool shirt and long johns under his green wool pants he peered into the slow trickle of water below a beaver dam.

The two sticks he had used to stabilize the trap placed in the anticipated beavers’ path were gone. The ice had been broken and refrozen since his last visit, evidence that the trap had done its job. The trapper knew the heavy furred animal must be right there somewhere in the maze of cold water, snow and ice. He swung his axe, hitting the hard ice. Chips flew in all directions. Again the axe came down, this time a splash of water accompanied the chards. A third and fourth swing began opening a hole large enough for him to see what lay at the end of the wire fastened to a tree root close the water’s edge.

A tug on the trap chain revealed the brown fur of a beaver, the biggest one this season. He pulled the large animal up onto the bank and saw that the trap had worked perfectly just as a mouse trap set to remove a rodent at home would.   This large rodent had swum from a hole dug into the bank under the surface of the water and had made its way down the creek. It crossed the small dam constructed of mud and sticks cut and placed in summer when the weather was warm and the water open.   The beaver left tracks in the snow when leaving the water and just before sliding into the narrow channel below.

This trapper did what he always had, what he knew. He knew beaver, perhaps better than anyone. Miles from his camp, it was time to go. But not just yet, a few more traps to set under the ice on a cold winter’s night beckoned. The moon was full and the shadows of the trees danced as he walked.

Hours later after skinning his days catch he sat by a campfire, a creek shushing his mind. A thousand times he’s been here, he thought, right here, surrounded by earth. Trees tall, air cold, fire hot. He lives his life to absorb Mother Nature as much as he can before his own inevitable death. Human roots are eons deep, his senses the result of a thousand generations who came before. He uses nature, takes and gives as people always have. He had emerged from earth’s ever changing –ever evolving lineage he knew.

He pondered the fact for a while that some humans disagree with his way of life. Animals are not to be a part of human existence they say. They are not to be utilized, not entertainment and never food. Nature should be observed from a distance, man far removed.

We are people, are we not? Do these people wish that humans weren’t human? They wish we were separate, that animals were not us and we were not animals. They would change the history of man and nature in an instant if they could and man would either not exist or would not be man at all.

Where would it change, this history if it could? Would it change by a campfire like the one he sits by now, flames hot on his leg, smoke stinging human eyes? Would it be changed 5000 years ago when an African tribe danced in celebration around just such a campfire after a successful hunt?

Or would it change later in history when a Sioux native carried a deer into his village just 300 years ago on American soil? Perhaps it should have changed just after the great depression when so many people were reliant on wild animals to feed their families.

Would it be changed instead in 1988 when an 11 year old boy trapped his first animal in a small American town, an event that changed his life forever?

Man and nature, life and death, not just parts of human evolution and earth’s creation instead, synonymous and never in the history of our natural earth-separated. It is what we are. We are people. We are natural. We are wild. We Live. We laugh. We hunt. We eat. We have emotion. We have animal senses. We are part earth. We always have been.

When and why would we ever try to become something we are not? To love nature is to take part in it. To use our emotion the way our natural instincts were meant to be used. At what intersection in our human lineage should man’s separation from nature have taken place?

At what point should man and nature have separated? He wondered. He stared upward for a moment and noticed how bright the star filled sky is, the moon casting shadows across the land.   His furs hung from a pole and glimmered in the fires glow. Boots dried by the fire as a coyote howled in the distance.   Just then he decided he doesn’t know. And until he knows, he’ll sit by this campfire and allow the creek to shush his mind.  Tomorrow brings another day on the line and it’s impossible for him to imagine a better place to be than right there, right then, on his trap line.