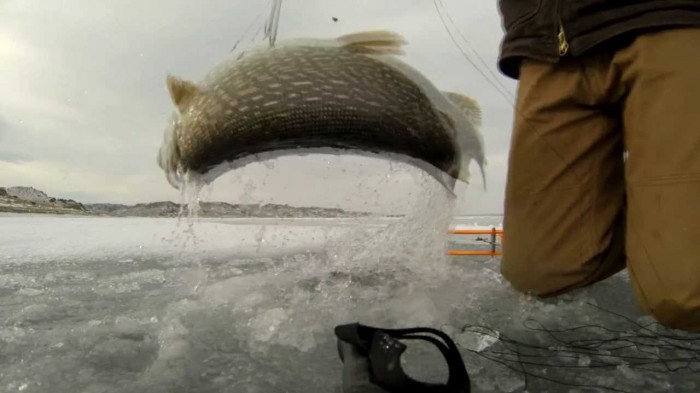 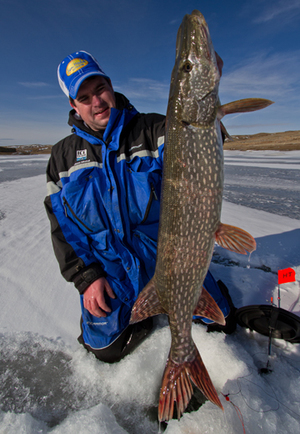 Montana’s Fort Peck Reservoir tops for big fish in multiple species, according to the Outdoor Channel’s article posted on their website back in March.  For those of you who haven’t experienced hard water fishing at Fort Peck Reservoir, see if this article will convince you to check it out:

Fort Peck Reservoir in northeast Montana is a long way from everywhere. There are no big cities or major airports nearby, and it takes a full day to drive there from almost everywhere people live.

As a result, most ice fishermen never even consider it. That’s a mistake. Fort Peck is the best multi-species lake in the United States for trophy-sized walleye, sauger, northern pike and lake trout.

There are other places in America that are as good or better for individual freshwater species, but none can produce so many different trophies from the same ice hole.

Although there are lakes in Michigan that are really great for walleye fishing, several Alaskan lakes are tops for lake trout and a few private northern Minnesota lakes “predictably produce really big northern pike”, but all of them are “one-trick-ponies”.  The article’s author, Don Mulligan, stated that “A good spot on Peck will produce trophies in all of those categories on the same day without ever moving.”  If you aren’t already planning your ice fishing adventure at Fort Peck, check out the rest of the article:

On Peck, walleyes in excess of 12 pounds are common, with 13- to 16-pound monsters possible every day. Northern pike often top the 20-pound mark, and plentiful lake trout routinely best 25 pounds. World-record class saugers are routinely taken from her depths as well.

Lots of big fish doesn’t mean Peck is easy to fish, however.

A great multi-species spot can be a challenge to find in Peck’s voluminous 247,000-acres of water in the summer, but top the 134-mile long lake with a sheet of ice, and it’s even more difficult.

Ice fishermen need to be mobile and able to test the lake’s numerous bays and complicated points. Most use an ATV and a good depth sonar to pick their spots. The good news is that wherever ice fishermen go, they are sure to have the whole place to themselves.

A couple places in the United States offer consistent opportunities to catch a 13-pound walleye through the ice, but only Peck gives anglers a chance to do it with no one else around to compete with.

That lack of pressure occurs all year, but is more pronounced in the winter, when few anglers tempt Peck’s often-fickle ice. The Missouri River meanders through the lake, making ice weak in spots all along the river’s course, but there are other dangers as well.

Pressure cracks are dangerous to cross and easy to see, but there are also gas vents to worry about on Peck. Natural gas vents are scattered all over the lake, and only allow a thin layer of ice to form when the rest of the lake has two feet of solid ice. Many of them are covered by snow and are often big enough to swallow an ATV.

First-time ice fishermen on Peck need to constantly test the ice as they move ahead and should stay on established ATV trails.

As Montana residents, we all have our favorite locations within the state that are special to us for whatever reasons, and, for many, Fort Peck might already be that place.  Either way, people everywhere recognize just how amazing things are in our beautiful state, and we need to make sure we utilize everything Montana has to offer.