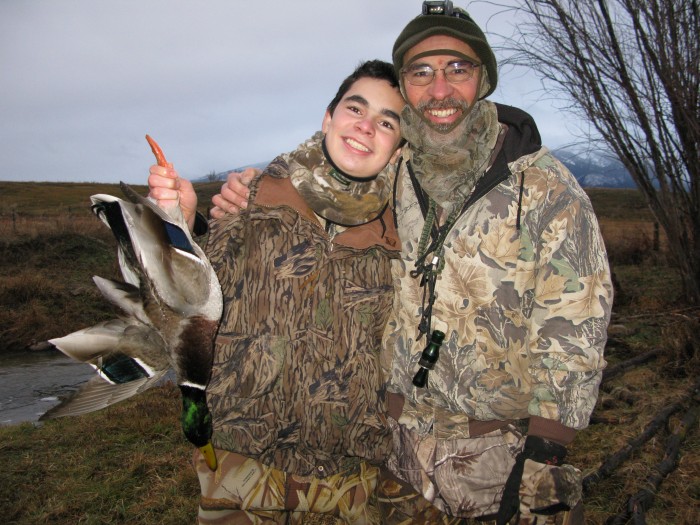 This story was received yesterday by Harry Marvin of Corvallis and embodies our hunting heritage.

Pete, his son Tim, and I met around 615 this morning to have a bite and some coffee. We consolidated gear into Pete’s truck and headed out to his blind. We set the decoys and had about 20 minutes to kill before legal shooting light. Tim is 14 and we sat in the blind talking about situations for when the ducks drop in, picking one bird out of the group, keeping the lead through the shot, and so on. Pete emphasized gun safety with muzzles forward and upward. Legal shooting time came and went without a bird. The first flurry of ducks came in 10 minutes later and all made it out. Our awesome display of poor shooting was a gift to that group. The next few would not be so lucky. A pair swirled in hard right to my side and neither made it out…another pair dropped in and stayed for dinner.

(Tim was shooting first but he just wasn’t connecting, some pointers from me on leads and follow through and reminders from Pete about shouldering early followed)

Pete reminded Tim to keep his gun ready and when we saw birds coming he would shoulder early and hold on the birds the whole way. I dropped back to call so Pete could “guide” Tim for whatever birds came next. Now we had good light and could see greenheads from hens…before we had low light and ended up with 3 hens and 2 drakes. 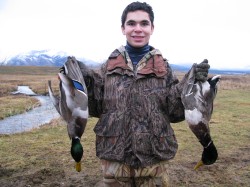 A pair of birds showed up overhead and peeled away left, I let out a few low growls with the mallard grunt and they locked right in. Pete and Tim tracked the birds and Tim let his 20ga 870 ring out, the greenhead folded right up, Tim had scored his first duck! High fives all around, an accomplished son with a proud father went to retrieve the bird. Shortly after another pair circled with that “already locked up” look to their flight. I called to Tim that the greenhead was on the right, He shouldered his gun and I kept the growls rolling as the pair dropped in straight at us, the birds banked right about 15 yards out and Pete called for Tim to shoot. Tim folded his second bird, another big greenhead. 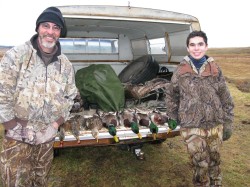 Pete Morin and his son Tim with the result of a successful morning.

Fun morning…we called it quits at 945 after not seeing a bird for almost an hour.