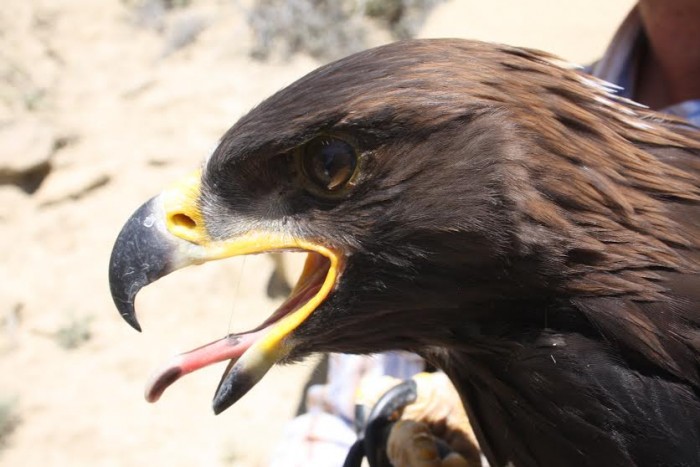 Golden eagles are pretty formidable birds. They can weigh up to 16 pounds, have wingspans of 7 feet and are equipped with 3 inch talons with a ratchet-type grip that can squeeze at 750 psi. Given all of their attributes, the birds were once hunted extensively across the nation and have been wiped out in the East out of concern that they would eat livestock. The eagles only survive in the United States in wide open areas like the Bighorn Basin of Wyoming – between the Bighorn and Beartooth mountain ranges.

Chuck Preston, curator of the Draper Museum of Natural History in Cody, Wyo., has been studying the birds for nine years in that area, capturing, banding and taking samples of food items from the big birds’ nests. What he’s found is that golden eagles are very closely tied to the population of cottontail rabbits. In other areas of the West, it’s more common that the birds are reliant on jackrabbits as their main food source.

To read more about this big sky hunter, read my story in The Billings Gazette at: http://bgz.tt/0tjc8