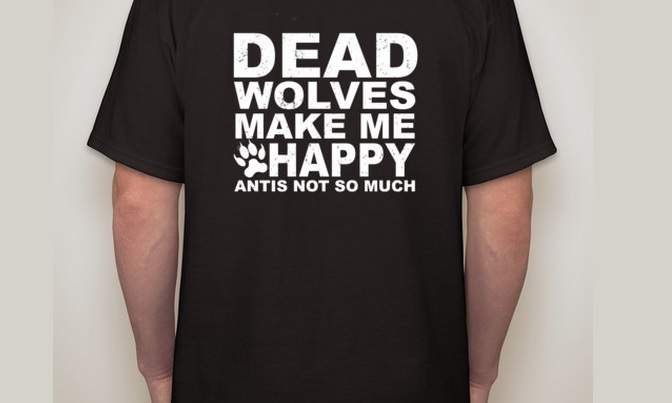 Too Awesome or Too Much?
By angelamontana

You may have heard of, or remember, the group of individuals with the Facebook page called “Montana Wolf Hunting and Trapping” (MWHT).  A couple of years ago, two of the members of the group were parked off of I-90’s interstate ramps on a few different occasions while collecting money from passerbys to donate to individuals to purchase wolf tags  (Check out the article here).  Well, MWHT has a new controversial project going these days that is getting a whole bunch of really good feedback and a whole bunch of really bad feedback.

What do you think of their shirts pictured below?  You can purchase a sweatshirt, a more-fitted women’s t-shirt or a unisex (men’s) t-shirt.  Apparently, they are only available to buy until next Friday, January 16th when it is rumored a new style of shirt will become available to other supporters of wolf management.  This group has been an advocate for wolf management in Montana since the season was reinstated a few years back, and they are even one of the sponsors for the upcoming controversial Great Montana Coyote and Wolf Hunt in Sanders County next weekend.  Funds raised from the shirt sales will be used to keep “fighting the fight” against the anti-hunters and anti-trappers that oppose managing Montana’s wolf population.

What is your opinion?  Are you interested in buying a pro-wolf management hoodie and/or t-shirt, or do you think MWHT has gone too far this time?  These shirts are out there and people are buying them.  If they appeal to you, get your own here.