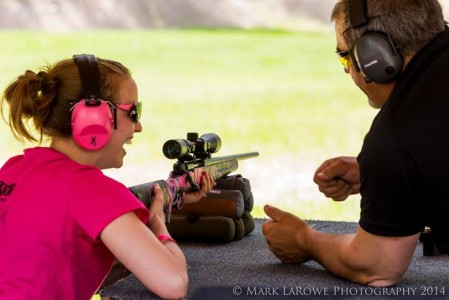 MISSOULA, MT – Bob Ward’s is proud to present the 4th Annual Babes N Bullets shooting event, a for women only event to be held June 20th at the Deer Creek Range in Missoula. Proceeds from the shooting event will again benefit Tough Enough to Wear Pink of Montana. Bob Ward’s has teamed up with the Holiday Inn Downtown, Culligan Water, Jaker’s, and several hunting and shooting sport brands to raise funds supporting breast cancer awareness.

(http://www.toughpinkmontana.org/)
The shoot will be held Saturday, June 20th at the Missoula Deer Creek Shooting Center. Sign in begins at 8:00am with the full day of fun from 9am – 4pm. Registration is open at Bob Ward’s in Missoula and online at
www.bobwards.com. There is a $125.00 registration fee which includes:

All day shooting clinic
Snacks water/soda and lunch
A goody bag with lots of fun items
After party at Holiday Inn including appetizers, drinks, raffle, and auction (4:30pm – 7pm)

Babes N Bullets is an opportunity for women of all skill levels to try their hand at shooting handguns, rifles, shotguns, archery, and pepper spray. Safety, proper technique, and fun are the main focus of this event. Here is a recap of past events from Tough Enough to Wear Pink of Montana’s website:
“Many of the women had never held a gun, and some were pretty savvy with the hardware! The instructors were terrific – the perfect mix of experience, patience, and humor. The highlight of the day was shooting the .50 cal pistol. Who knows what the good folks at Bob Ward’s might bring this year.”

Registration for the event is open now, and if last year is any indication, it will fill up fast. You can register in the Missoula Bob Ward’s store or online at www.bobwards.com. The $125 registration includes: Babes n’ Bullets shirt, shooting safety equipment, lunch, a full day of shooting, transportation to and from the range, and an after party. The after party is your opportunity to drink, nibble, win raffles, bid on auction items, swap stories, and pick out the gun you want to buy. Bob Ward’s experienced staff, vendors, and volunteers will assist everyone both at the shoot and the after party.

Invite a guest to the after party for only $25 more. The guest does not have to be female.

Bob Ward’s is Montana’s oldest and largest sporting goods retailer with stores in Missoula, Butte, Helena, Hamilton and Bozeman, and online at www.bobwards.com. In June, the company will celebrate its 98th anniversary.