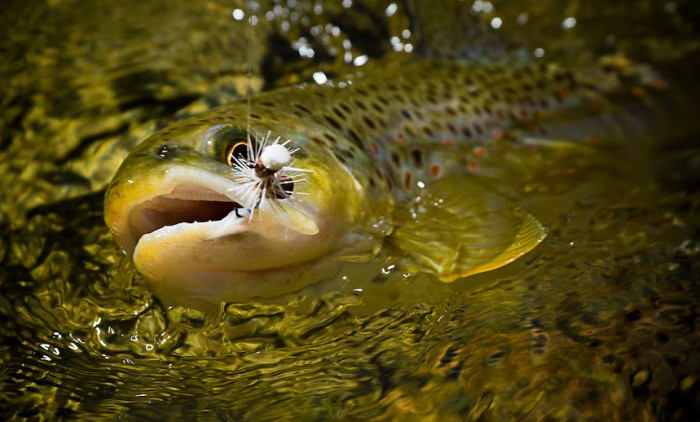 An outbreak of a fungal infection known as Saprolignia occurred on the Big Hole River in the fall of 2014. The outbreak was centered on a stretch of the Big Hole from Jerry Creek to Brownes Bridge affecting mainly spawning brown trout. Through their spring population surveys, fisheries biologists have recorded a notable drop in the brown trout population in that area. However, they conclude that the previous record high brown trout population in the river likely contributed to the spread of the fungus in 2014.

Saprolignia is a naturally occurring fungus present in nearly all waters at all times of the year.  The immune system of healthy, non-stressed fish is able to combat the disease and these fish are not affected. Generally Saprolignia infects fish that are already diseased, stressed, or otherwise weakened. The infection appears as large, white, cotton-like blotches on the skin and fins.

Big Hole brown trout population surveys conducted in the spring of 2014, prior to the fungus outbreak, indicated numbers of fish in the Melrose area were at record levels of 1,871 per mile (compared to long-term averages of about 960 per mile). The 2015 surveys show the population declined 824 brown trout per mile.

Olsen also stressed that the high number of brown trout in the river likely contributed to the spread of the Saprolignia fungus in the fall.

“High population densities lead to close proximity of fish and higher spore production from the fungus, particularly at spawning areas leading to increased transmission of the disease between individuals. The high density of fish also likely lead to poorer condition of the fish going into the spawning season, and thus greater susceptibility to the disease.”

Because the fungus only impacted spawning brown trout (and to a lesser extent spawning mountain whitefish), there are still plenty of smaller fish  in the 10-13 inch range that will quickly grow and replace those fish lost to disease. Further, the decline in brown trout numbers will result in more food resources being available for larger brown trout that survived the disease outbreak. The size and condition of surviving fish should improve.

FWP will conduct additional monitoring in the fall of 2015 to determine if the fungus outbreak is still present.