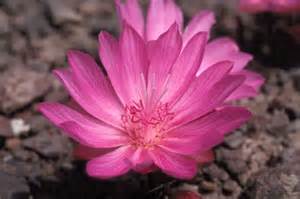 In search of the Bitterroot
By Toby Trigger

Keep an eye out for Montana’s state flower – the bloom time is coming soon in May and June.

In 1893, after the World’s Fair in Chicago, several of the first state flowers were adopted. Montana was one of the states that adopted official flowers soon after the Fair. A Montana Floral Emblem Society was formed, with Mary Long Alderson serving as chairman. Montanans were then asked to vote for their favorite flower. Ballots had to be completed and returned by September 1, 1894. Montana’s press joined in the effort. Columns described the cause and the floral candidates. Being most common in western Montana, the bitterroot led the voting in ten of the fifteen counties which voted. When the polls closed, 5,857 ballots were in. More than 32 separate flowers received votes. The clear winner, with 3,621 votes, was the bitterroot, followed by the evening primrose, at 787 votes, and the wild rose at 668. At Mrs. Alderson’s urging, the 1895 Legislature responded to public preference and sanctioned the symbol. It was then adopted as the State Flower of Montana on February 27, 1895.

The bitterroot had become a Montana icon long before it was voted the Montana State Flower however. In 1889, at the Montana Women’s Christian Temperance Union meeting in Missoula, a “little blue flower that grows near the snow banks” was selected as the WCTU’s official state flower. Two years later, that choice was changed and the bitterroot received the WCTU’s designation. A perennial, the bitterroot has an exquisite pink blossom which grows close to the ground and its delicate shadings offer the eye one of the loveliest of wildflowers. The bitterroot (Lewisia rediviva) was a logical historical choice. In 1805, the bitterroot was “discovered” by Meriwether Lewis, of the Lewis and Clark expedition, hence the genus name of the flower. The species name, rediviva, refers to the plant’s hardiness. In fact, bitterroot can live for more than a year without water. For this reason, bitterroot has also been called the “resurrection flower”. The plant lent its name to a Montana mountain range, a river, and the famous Bitter Root Valley. Few state flowers are more beloved than Montana’s bitterroot. With a strong Indian heritage and a name derived from the leader of the Lewis and Clark expedition, the bitterroot was most appropriate as a state symbol.

The bitterroot was treasured by Native Americans, who used its roots for food. It was considered a luxury food rather than a staple. Bitterroot was especially important to the Flathead Indians who lived in the Bitterroot Valley. Each spring, Spokane, Nez Perce, Flathead, Kalispell and Pend d’Oreille, gathered near what is now Missoula to dig the prized root. Early pioneers also ate bitterroot, though they seldom harvested the roots themselves. Instead, they bartered with the Indians. Montana’s Indians used the plant as an important part of their diet. Tribes timed their spring migrations with the blooming of the bitterroot on the hillsides, where it could be abundant. After being dug, cleaned, and dried, the root provided a lightweight, nutritious supplement to a diet that otherwise consisted of wild game to a large extent. At major trading centers like The Dalles, the root was an item of barter and exchange. A sackful commanded a substantial price – usually of equal value to a horse. One ounce of dried root provided enough nourishment for a meal, but the plant was seldom used uncooked, since it has a bitter taste and may cause swelling if eaten raw. More traditionally, Indian women boiled the root, then mixed it with meat or berries. Pulverized and seasoned with deer fat and moss, the cooked root could be molded into patties and carried on hunting expeditions or war parties