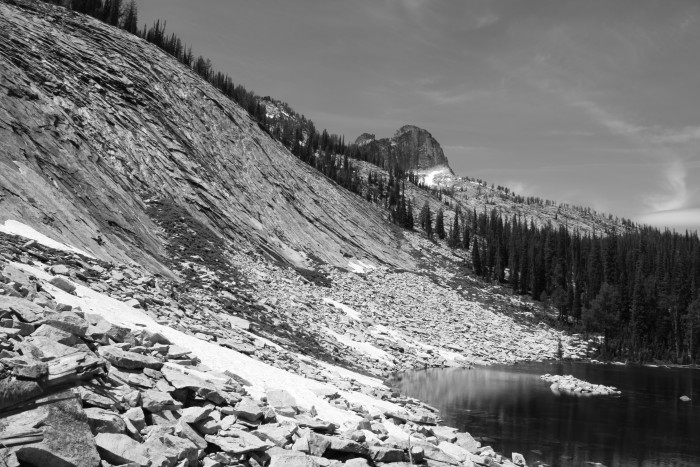 With just 37 bitterroot lakes remaining to complete my goal to hike to every lake in Montana’s Bitterroot National Forest I’ll post my experience during the coming weeks. I’m really hoping the fire season doesn’t prevent me from accomplishing my goal before the early archery elk season. Choosing between finishing my fishing goals and hunting elk would be a tough decision for me to make. 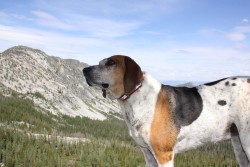 Not all lakes in the high country offer great fishing, in fact about 1/3 of the Bitterroot Backcountry lakes are fishless. The inherent beauty of these lakes and the pristine natural setting under towering rocky peaks are worth the effort even if the fish are else ware. 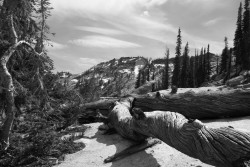 Unique artifacts like old rail car remains and dilapidated cabins remind us of a time when mining, logging and agriculture took precedence over preservation of wildlands.

On Wednesday my faithlful hound dog Sapphire and I ventured into Sheafman, Knaak and Aichelee lakes. The mystery of whether these lakes hold fish was partially solved when I saw westslope cutthroat trout rising on Sheafman Lake. 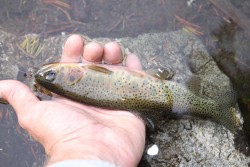 Cutthroat trout taken on a fly on Sheafman Lake. Walrath 2015

By the time I finished fishing on Sheafman and made my way up to Knaack lake the sun was bearing down and I couldn’t see any fish along Knaak lake. That doesn’t mean there aren’t fish in the lake and I wish I had the opportunity to fish the early morning hours. But if I did have that chance that would be one less excuse to come back later!

Towering directly over Aichelee Lake is a massve rock formation called Castle Crag. The steep waterfall rolling out of Aichelee’s outlet leaves no chance for this lake to hold fish but the view was well worth the climb. 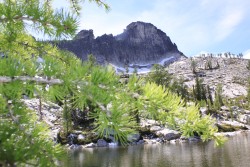 On Thursday I trekked over St. Mary’s peak and dropped into St. Mary Lake. The temperature was hot and the water was so cold it hurt my feet to stand in it. I stripped down and dove in and wasn’t bothered by the heat for another two hours.

I didn’t see or catch any fish from this lake but the terrain below The Heavenly Twin Peaks is stunning. A bushwack of about 3 miles led me to the Macalla lakes which I knew were fishless however I was there to find the remnants of an old cabin. To my surprise there are actually two old cabins on one of the lakes. 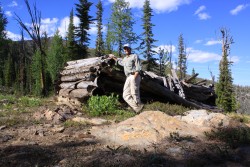 One of Two cabins discovered on Macalla Lake by the author this week. Walrath 2015

Backcountry lake exploration is about beauty, history and fish and so far I’ve found atleast two out of three at every lake I’ve been too.

I hope you get a chance to explore the Bitterroot Mountains this summer, the experience is well worth the effort.