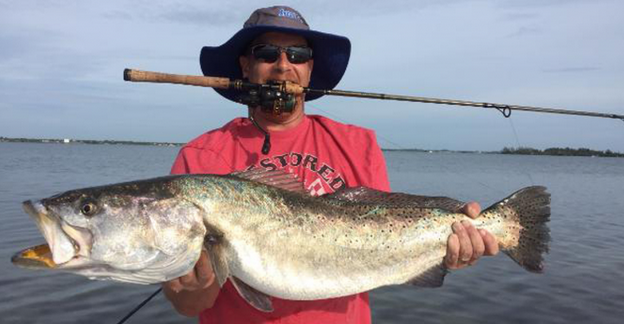 Luke Ledbetter was supposed to take his kids to Disney World that day, but when Captain Peter Deeks called him up and said he had an opening, Luke took the opportunity.  While fishing Florida’s Indian River earlier this month, Luke hooked a monster that he at first thought was a big redfish or snook.  Once he reeled in the catch, he saw that it was a three foot long, 14 lb seatrout.  The exact fish measurement was 34.24 inches long and estimated 14 lbs by calculations.  The angler and Captain measured the fish and precociously released it back into the river.  The records are based on length so anglers can release fish unharmed back into the water.  If the International Game Fish Association approves Ledbetter’s fish as the new world record, it will beat the current record by only 8 centimeters.