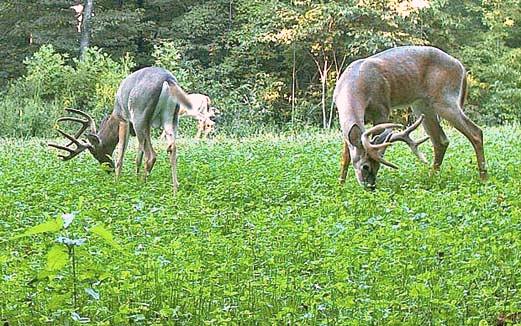 One doesn’t think much when thinking of how an outfitter keeps their game coming back to the same spot year after year.  The typical thought is that the basic animal instinct tells them where to go.  That may be true, but their basic animal instinct also tells them to go where the food is best and plentiful.  Here are some secrets of how 3 top hunting outfitter in the U.S. keep their game coming back.

Carl uses a blend of chicory and ladino clover.  the density of the chicory allows a smaller plot to feed more deer than a regular clover plot.  He starts his plots in early spring or fall and triples the recommended seeding rate so it outgrows the weeds.  He fertilizes the plots to keep them growing during the summer and also seeds new fall plots with ryegrass that the deer go crazy for.

Ted plants a blend of oats, barley, wheat and daikon radishes in August.  Each plant becomes edible in different times of the season and he plants them in August.  The deer start off with the oats, then barley and wheat and finally hit the radishes around October.  Ted also tops off his plots with canola which the deer are in love with.

Robert plants ryegrass in September, replants in December then just before the January rut, he puts ammonium nitrate in the soil to give the ryegrass a boost before the hunt.