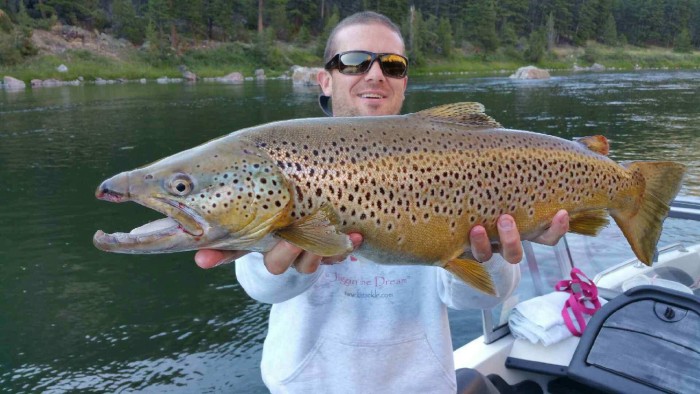 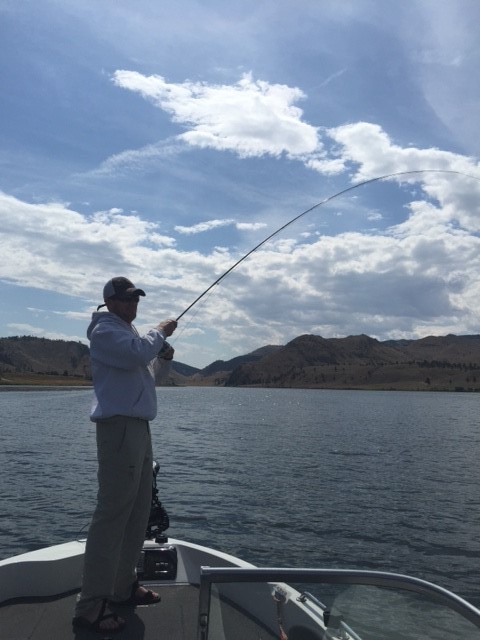 My dad and my friend/outfitter Josh Steinmetz (www.steinmetzoutfitters.com) were giving me the stank eye as I was talking in the front seat of my pickup to Mark Ward from the Montana Outdoor Radio Show.  Last Saturday morning we met our outfitter, Josh Steinmetz at the Grubstake Restaurant in the Helena Valley for a day of fly fishing at the Gates of the Mountains.   With me being the first person there (first time for everything) I decided to call in and give the folks of Montana a fishing report from Holter Lake since I had been guiding it a lot.  After having a couple on-air laughs with Mark Ward of the Radio show, it was time to get fishing or my co-pilots were going hook a Glass Minnow in my truck tire!  We zoomed over the north hill to the glorious Gates of the Mountains exit and pulled up to the ramp.

Heading up river with fish rising, Josh muttered, “dang, it’s tough to drive by all those fish.”  Getting up the river to a good run we put the boat on anchor lock in a beautiful seam that had a boiling back eddy just above us.  We were fishing the world famous stretch of river known as the LOG (Land of the Giants). As dad and Josh started lining the fly rods that gnarly deep twisting hole got the best of me.  With dad and Josh not paying attention, I lifted up the center console and found a jigging rod with a 1/8 ounce Walleye Fry Glass Minnow already equipped.  I slid it out of the holder and hopped up front and readied myself for a cast.  Mentally dissecting the hole in my mind, my dad chuckled a “you couldn’t resist could you?”  I laughed back and said, “Nope.”  Pitching the minnow replication right into the depths of the hole I started a sideways rip back towards the boat.  As I was taking in the life of the morning, it all of a sudden felt like a pelican flew into my rod.  As my whole body felt like I got slammed by a grizzly bear the giant brown trout came flying out of the water.

“Freaking Trevor!” Josh yelled when he saw the giant beast going acrobatic across the river.  This is where the battle began.  Even being in a boat and able to chase the fish, he ripped across the river and tried to escape behind a giant boulder.  Holding him the best I could he made a huge run back towards the boat.  Let’s just say the reel was smoking, I was cranking so fast to keep up with the submarine sized fish and not allow slack in the line.  Catching up with him, it was now time for him to run up and down the river a few times before I could have him beat.  Then, as fast as it all happened the giant buck slid into the net…BARELY!!  What an absolute giant…I have caught some very big browns but this was my biggest to date.  And most magical fish I had ever caught…here I was in the very real moment I dream of every second of my life.  It’s funny how a person can spend hundreds of hours of their lives dreaming of a moment that only takes minutes.  I looked up from the fish in the net and saw the look on my dad and Josh’s face.

I gently raised the magnificent finned creature for a few quick pictures and back into the net he went.  Exhausted from his battle and not wanting to get beat, he was very slow to get kicking again.  Finally catching his curves I let him go and down he went to his home and lay tight on the bottom.  The ol’ warrior had met his match and it was his time..

Taking in all the surroundings it is crazy how things work out.  Spending countless days and nights chasing these intelligent, spiritual gill-bearing aquatic animals, it happens on the first cast of the morning.  But like anytime I’m out there, I’m all in!  What an absolute magical blessing of a day on the water.  Cheers to “Jiggin’ the Dream”