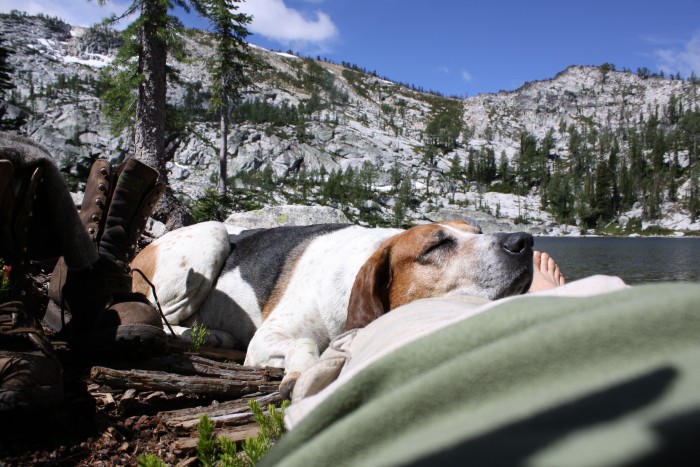 This week I hiked nearly 30 miles and reached five remote lakes in the Bitterroot National Forest.  The miles and lakes aren’t unusual for me because backcountry fishing is what I do this time of year.  The unusual part is that of these five lakes exactly zero offer a trail to reach them.  Zero also happens to be the exact number of lakes that held fish. 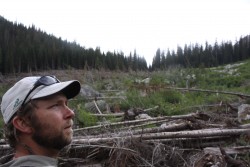 Miles of blow downs and avalanche rubble sum up the hike into the Totem Peak area.

Hiking along the South Fork of Bear creek for about seven miles, the trail dissipates leaving the hiker to pick through blown down trees and brush for several miles.  The old Forest Service trail blaze mark that resembles an upside down exclamation point can be found on trees some of which are now dead or down.  A massive avalanche ripped through the valley recently leaving piles of massive trees and boulders in its wake.  At least the mosquitos were out in full force! 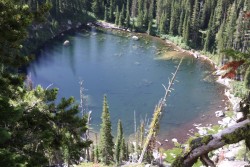 The shallow lower Two Lakes from several hundred feet above can’t hold fish at 7,000′ but the benefits to wildlife and ranchers up to twenty miles away and stunning mountain views make up for the lack of fish.

The first lake I reached was South Bear Lake.  The thin streams of water running down smooth rock faces made it evident that the lake wouldn’t likely hold fish.  The lake is beautiful and could hold fish if they had a way to get into the lake.  A quick dinner cooked on the lake unfortunately didn’t include fish and I made my way to a nearby lake called North Totem Lake, named after Totem Peak looming overhead.  With no inlet or outlet on this high mountain lake, the likelihood of holding fish is non-existent. 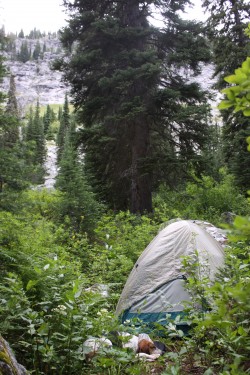 I hoped the other lakes on my agenda  as I made my way off the mountainside back to my camp made at the confluence of Two Lakes outlet and South Fork of Bear Creek.  This location made finding my camp easy as I pushed through brush and trees as daylight evaporated.

In the morning, I broke camp and headed straight up to Two Lakes with a really creative name: “Two Lakes”. Finding Two Lakes fishless but with stunning views of the mountains as my only reward I trekked back to camp and packed it up before picking my way through more blow downs and brush over four miles of tough terrain.  Another night spent in the backcountry found me about one mile below Totem Peak Lake.  The hike was more of a scramble and the deep mountain lake is nestled a few hundred feet below the summit of Totem Peak towering above at an elevation reaching just over 8,200 ‘. 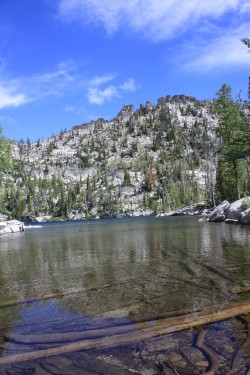 This lake was more valuable as an overlook than a fishery but as my 81st lake reached in the Bitterroots, I couldn’t complain.  Many lakes offer great fishing, this one, like the others on this trip simply offered great views.  With a nine mile hike out to my truck from here I left feeling more like a mountaineer than an angler.  Twenty-two lakes remain on my list to complete every lake in the Bitterroot National Forest and I’m sure some will make me feel like an angler but today I feel more like a boxer who somehow stayed on my feet for ten rounds in a ring with Ali.