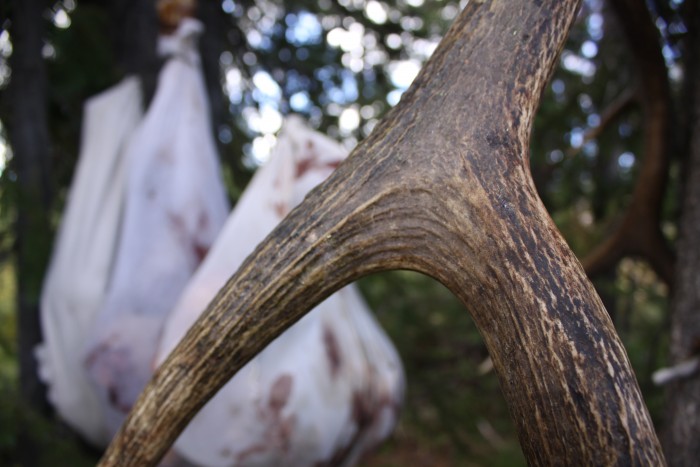 Getting “The Call”
By Toby Trigger

I was on my way to Ovando to look for sand hill cranes on Sunday afternoon when a weird text message popped up on my phone.  I don’t usually notice messages while I’m driving but this one caught my attention – it was from “noreply@findmespot.com” and it simply stated; “Got one!” with GPS coordinates.

The message came from my friend and hunting partner Harry Marvin.  It coincided with an email with a link to google earth that included a pinpoint location on a topographical map and a phone call from my wife that was almost simultaneous with the text and email. 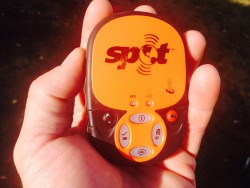 The little modern device that got me into the hunting experience faster.

I turned my truck around and within an hour I was standing at the trail head with two pack frames, rope, food, water and beer.  Two hours after that I was admiring Harrys 6×6 bull that gross scores 294 inches.   Although I didn’t use a GPS to walk the three miles into familiar woods I could have if I had needed it.

The big bull bugled from his bed in the afternoon accompanied by his harem.  Harry snuck in to 33 yards and waited nearly 10 minutes for a broadside shot.  The bull ran 60 yards and flopped over with a muzzy broad head lodged in his heart.

Now we had the distinct pleasure of hanging meat from a pole and carrying mead laden packs for three miles over deadfall timber, rocks and across creeks back to our vehicles.  At the trail head we pulled out chairs, looked at the stars and enjoyed at least one more libation.

The next morning we cooked meat on a spit over a fire and took our time coming out.  A marten in a tree entertained us and I captured it mid-air jumping over Harrys head.

Even though I wasn’t there for the release of the arrow, the timeless event that man has experienced for centuries, I was part of the hunt.  Oddly enough, I was able to be part of the age-old experience sooner because of modern technology.  It was a great hunt and a great memory.

I tried to capture my experience through these photographs – pack outs are as much a part of the hunt as stalking and shooting! 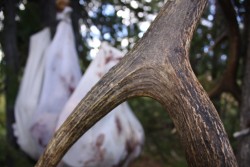 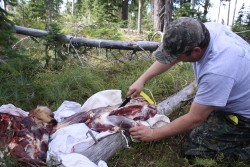 Boning out the quarters for the pack out 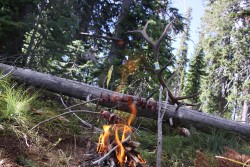 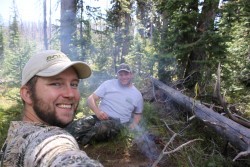 Fat, dumb and happy after eating elk steaks cooked over a spit! 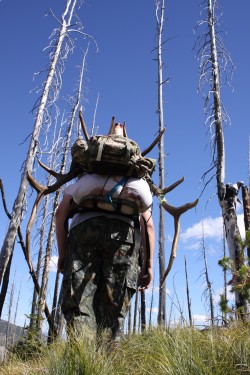 My view all the way back to the truck 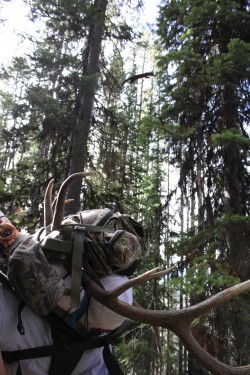 The marten that entertained us and jumped over Harrys head with the antlers and meat on his back. Note the marten jumping top center of the page.

Congratulations to Harry Marvin on his first bull with a bow on a DIY hunt on Montana public lands!