Yes, this site is MontanaOutdoor.com and includes news about fishing, trapping and hunting in Montana, but we still like to occasionally acknowledge news across the country and around the world, too.  An alarming article involving a “mass die-off” of approximately 211,000 Saiga antelope in Kazakhstan in early 2015.  This was posted on iflscience.com, and you can read about the disheartening mystery here: 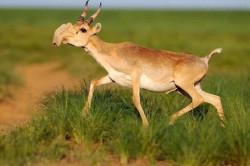 The unexplained widespread death of Saiga antelopes in Kazakhstan earlier this year is even worse than initially estimated.

In May, it was believed that 85,000 Saiga antelope died in just one day, quickly followed by another bout of deaths, estimated to be around 60,000.

However, the total figure is now looking to be at least 211,000 – 88 percent of the antelopes in the Betpak-dala desert of Kazakhstan, and around 70 percent of the total population of this already endangered species.

Last week, scientists from Russia, Kazakhstan, Uzbekistan, Mongolia and China met at Tashkent, Uzbekistan to discuss the sudden and alarming die-off, along with representatives from the UN. The meeting concluded the main culprits were climate change and stormy spring weather, combined with disease.

The conclusions from the conference in Tashkent are similar to the initial hypothesis – although just as vague. Their habitat was subject to rough storms and temperature drops around May, just after they shed their winter coat. The researchers believe this caused stress to the animals and weakened them, allowing Pasteurella bacteria to overcome their immune system.

However, questions still remain. Some herds suffered a near 100 percent mortality within 24 hours – a rate which is nearly unheard of. Additionally, similar temperature changes have occurred in previous years yet only a comparatively small number of saigas died.

“This is not really normal for a biological system. It’s bizarre, extremely rare and doesn’t make a lot of sense. Usually in a system, a proportion die and get sick,” Richard A. Kock, of the Royal Veterinary College in London, told The Guardian.

At the Uzbek conference, scientists and the UN-based Conservation of Migratory Species of Wild Animals revealed a plan to help understanding and contain the situation. They will attempt to improve research and monitoring of diseases, increase anti-poaching efforts and control the rapid infrastructural development such as mining, railroad construction, and road building. There is also talk of altering the border fence between Uzbekistan and Kazakhstan, which interferes with the natural route of the saiga.

The mass die-off came at a particularly upsetting time for the saiga antelopes. Saiga used to roam the Asian grasslands in their millions. However, poaching for their horns – which are used in Chinese medicines as an alternative to rhino horn – meant their population declined to just 50,000. After huge conservation efforts, their populations managed to bounce back. The setback this spring means this effort was likely to be in vain.

In addition, scientists are looking closer at earlier and smaller saiga die-offs, such as ones during the 1980s, to see if they were preceded by the same weather conditions as well.

“I’ve worked in wildlife disease all my life, and I thought I’d seen some pretty grim things,” Dr Kock said to the New York Times. “But this takes the biscuit.”