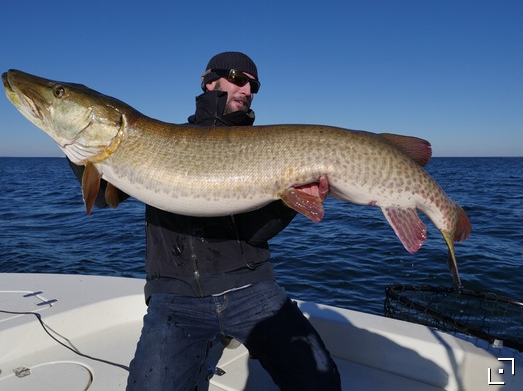 Robert Hawkins of Montana grew up on Flathead Lake where he got hooked on fishing for large fish and is now the owner of Bob Mitchell’s Fly Shop and resides in Minnesota .  On his first day fishing Lake Mille Lacs in Minnesota, Hawkins hooked the possible world record muskie on a fly!  Once hauled in and netted, the fish measured 57 inches long and estimated to be over 50 pounds.

Hawkins said he did not see the fish hit the foot long custom fly, but felt it hit hard and when he saw it turn sideways he knew it was the biggest muskie he’d ever seen.

The trio of fisherman handled the fish out of the water only briefly to get it’s measurements, take some trophy pictures and let the big fella go.  The Minnesota state record is currently 56 inches long, 26 1/2 inch girth and weighed 54 pounds.  Hawkins’ fish was 57 inches long with a 26 1/2 inch girth.  To qualify as a state record, the fish would have had to been killed and brought in for official measurements.

Hawkins still has a chance at the International Game Fish Associations world record for fly-caught fish that was released, but says that the record does not matter to him.

Check out the facebook page with the video here