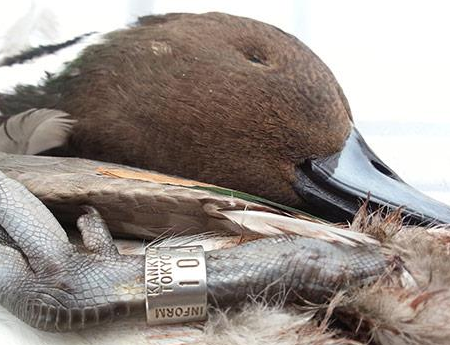 Banded Duck Travels Over Seas and over 5000 Miles!
By rowdyrob

On opening day of duck season in California, Eric Heidman knew he was a lucky guy when he shot a drake pintail out of the sky. Heidman’s friend, Jared Wolfley, drew a reservation at Delevan National Wildlife Refuge where the two were hunting.  After discovering the duck was banded, they soon learned that it had an amazing story.

The bird was at least 14 years old and was banded the day after Christmas 2001 at the Saitama Duck Refuge in Obayashi, which is more than 5,000 miles from Delevan.  The pintail is only the 16th duck banded in Japan that has been recovered in CA since 1977.