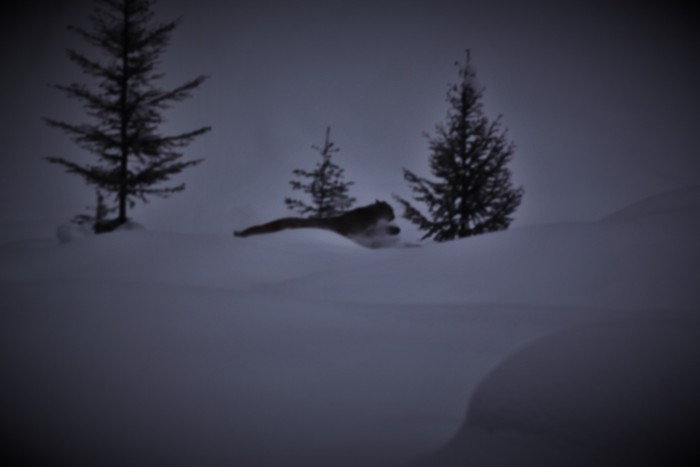 Tom Powers has a cabin in the Westfork of the Bitterroot and invited a few lucky friends to join him for a few days to help out with a lion tag.

I pulled into his driveway miles from any paved road pulling my snowmobile and two black and tan pups just an hour or so after the sun went down and couldn’t wait to start looking for tracks in the perfect snow conditions.

Our friends Becky and Jerry Doyle brought seasoned hounds a couple hours later and it didn’t take long before Jerry, Harry Marvin and I hit the roads looking for tracks.

Less than ten minutes after leaving the security of the cabin we found fresh lion tracks walking up the road we had all just driven down in the past few hours.  A quick back tracking with a few runs on the snowmobile established our starting point.   We kept looking for tracks and checked a few traps before heading back to the cabin for an hour of sleep. 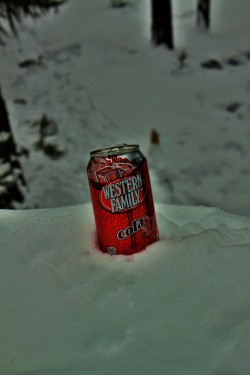 A pop can marked our spot and let any other hound men know that track was spoken for.

At first light hounds were let out of dog boxes and fitted with tracking collars and bells.  The bells ward off wolves and the collars help hunters keep track of the dogs whereabouts.  Jerry and Becky started using bells after losing hounds to wolves a few years ago and haven’t had any issues since. 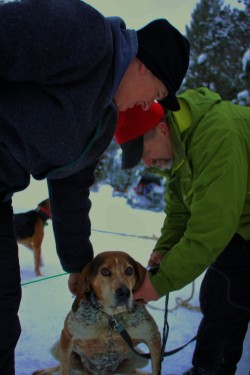 We all listened to the barking of the hounds as they worked the track and lined it out up and over a mountain.  Within 45 minutes the tracking device showed the hounds were treed.  The distance was .8 miles with 1000′ elevation gain.  Forest Service roads led to within 400 yards of the baying hounds which Harry and I quickly drove to on our snowmobiles. 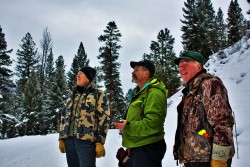 My little hound pups, Action and Flora enjoyed the hike as much as we did.  A mountain lion peered down from the top of a massive fir tree nestled at the base of cliffs above Hughes Creek.  My pups made an attempt to bay with the big dogs but found out quickly that tree belonged to the old hounds who did the work.

Harry and I ate lunch while we waited for the hunters to arrive but the lion had other plans.  It jumped from the tree and ran at the approaching hunters with the hounds on its tail.  When it saw Tom, George and Jerry it dodged them heading toward the bottom of a drainage. 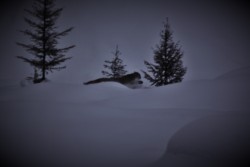 The excitement of the lion running past the hunters was awesome but for me, it also provided an opportunity for my hounds to follow the fresh tracks of a lion and hounds for nearly 500 yards.  Perfect training for young pups on a leash. 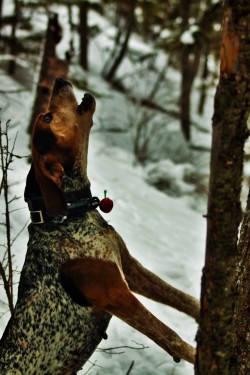 At the tree the lion stared down from another large fir, this time not going anywhere.  I tied the hounds back and Tom drew his bow on the cat perched twenty yards and broad side.  The shot was perfect and snow fell as branches cracked from the weight of the falling cat. 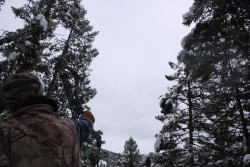 The hounds went crazy as I unleashed them allowing them to wool the cat for a while and let my pups get a good training lesson.  The cat was treed above an accessible road and the snow made the drag easy.

While this day was about as good as it gets for hound men and hunters but it doesn’t always go like this. 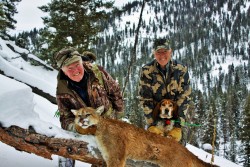 In the past five chases that I’ve been on with different hounds and hound men only two resulted in a treed mountain lion.  One of those lions could have been mine but it bailed from the tree and lost the hounds that chased it.

It takes dedication to hounds, training and physical conditioning to be a good hound men.  But it only takes an adventurous spirit and love for wild places to appreciate Montana’s massive felines and the thrill of the hunt.