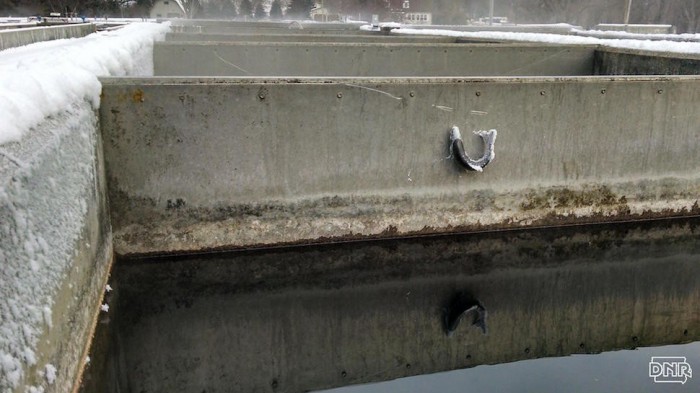 If you’re trying to figure out how this “fishcicle” managed to get stuck and frozen to a concrete wall at the Decorah Fish Hatchery in Iowa, then let us clarify–the enclosure wall is not, in fact, made from concrete.

According to an article on nerdist.com, during the winter of 2013, Biologist Brian Malaise found the pictured fish during his morning rounds.  Think back to the movie “A Christmas Story”….remember the tongue on the pole part?  Yeah, well, it turns out, if you’re a fish and you jump too close to your metal wall enclosure, the same thing that happened to that kid can happen to your entire body.

When objects of different temperatures come into contact, they want to achieve thermal equilibrium (the point at which one is no longer warmer than the other). It’s this heat transfer that led the trout straight to Davey Jones’ locker. The moment the surfaces came into contact, the metal robbed the fish it of its body heat. And because aluminum is so conductive – it’s one of the most conductive common metals – the transfer happened fast enough to freeze the fish’s water-coated skin to the baffle.

It would be interesting to see if any other hatchery workers have seen something like this happen where they are, or I wonder if, wolves that are trapped and/or hunted, the fish become educated and learn not to jump too close to the wall…probably not, but the thought is entertaining.