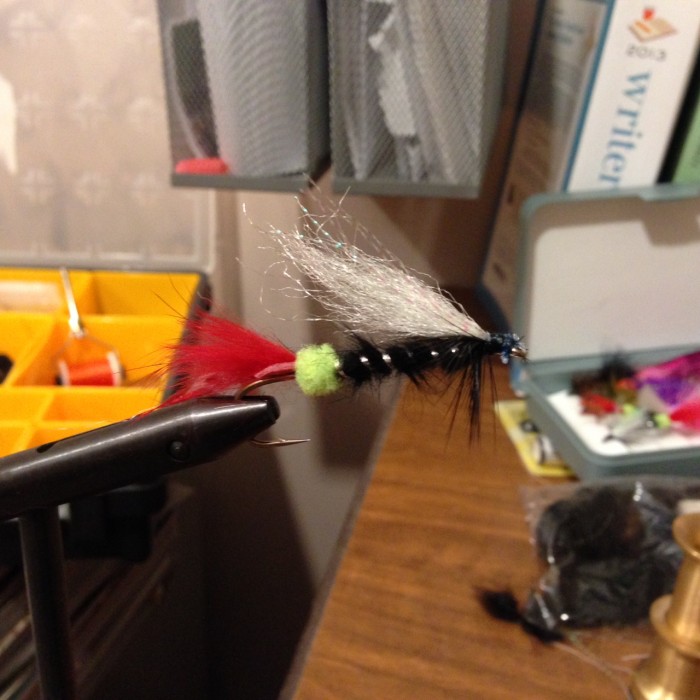 There are few all time great flies as the Green Butt Skunk – And my fly box always has a few variations of this classic steelhead pattern when I hit steelie rivers.   Here’s the history of one of the worlds most famous flies!

It was developed by Dan Callaghan, date unknown, but sometime after 1950. He took the original Skunk steelhead fly and added the green butt. Just that minor change made a big difference for many steelhead fly fishers!

I met Dan at the Salem YMCA as we both frequented the lunch hour workout crowd and he usually asked me…”been fishing”? We would chat occasionally about fishing which always brought a smile to his face.

Dan passed away in April 2006 and a close friend of his, Steve Bukieda along with Joel La Follette owner of Royal Treatment Fly Fishing in West Linn, Oregon got together and came up with the idea to honor Dan’s memory and his love of the North Umpqua River.

It became known as The Dan Callaghan Collection – 101 Green Butt Skunks and was sold by sealed bid auction for $6,300, with proceeds going to the North Umpqua Foundation to benefit fish and their habitat. Included in the plate is one of Dan’s original Green Butt Skunks. The other 100 flies were tied by some very talented tyers and steelhead fishers in the Northwest. The plate was mounted and framed by Fritz Gerds, who was a fly preservation expert.

Dan was an Oregon lawyer by trade and an incredible photographer. He loved the North Umpqua River. He created some spectacular photographs of the river which can be seen in a book entitled [Dan Callaghan’s] NORTH UMPQUA. His wife Mary Kay published the book after his death as a tribute.

His passion for the North Umpqua can be seen in the photographs he created of the river and in his legacy of advocacy to protect and preserve the river and it’s wild steelhead.

Dan was one of The Steamboaters founders, a fly fishing and conservation club originating at the Steamboat Inn on the North Umpqua. His photos are legendary.

You can see pictures of The Dan Callaghan Collection on the 101 Green Butt Skunk Facebook page.

Pick up one and…go fish!

This article and photos were found at :