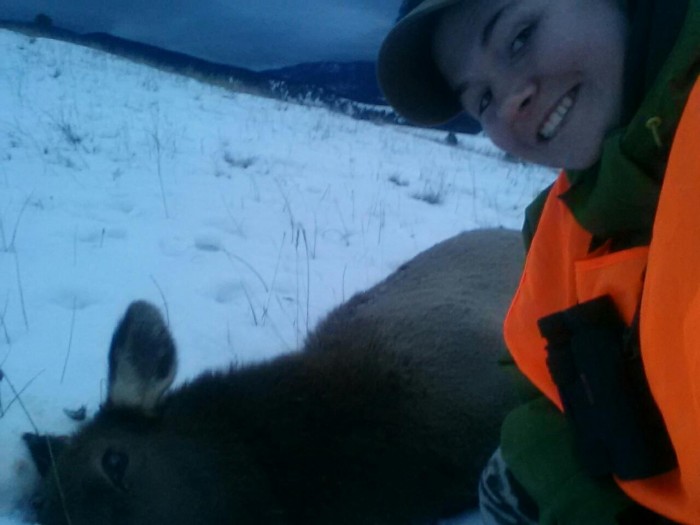 For years Jackie Doyle has hunted with her family in western Montana.  In fact she grew up in this area of the state and has hunted black bear, mountain lion, deer and elk right along side her mom Becky, father Jerry and her brother Wyatt.  She’s experienced the sounds of big bull elk ripping bark off trees and sounding off like a trumpet just yards from her in big timber and has stood over baying hounds hell bent on getting big lions out of a tree.

Camping in the woods and eating wild game is just a part of life for this young mother from Sula and she wouldn’t have it any other way.  Hunting with family has always been part of her life. But on Wednesday January 28, 2016 she reached a new mile stone.  While on a damage hunt near Missoula, MT Jackie hiked along an open ridge and peered out over the wide expanse of  rolling hills and sparse timber like she has many times before, only this time she was alone.

More than 100 elk grazed on the neighboring property and she knew there was a chance those elk would keep moving toward her and eventually jump the fence onto the property she was hunting.  One big lone tree was her camouflage for the next three hours as she waited motionless watching the elk move toward her. 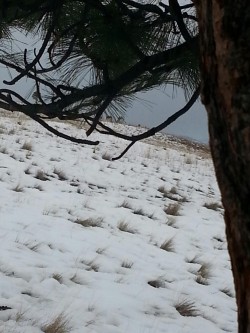 Just as she began to think they weren’t going to come to her side before legal shooting light was over the lead cow stood with her head over the fence and raising her front legs leapt over the fence bringing dozens more with her.  Jackie raised a .338 magnum and settled the cross hairs on the big elk’s neck at a distance somewhere around 200 yards and slowly squeezed the trigger.

I received a phone call from Jackie because she needed help getting her elk off the mountain.  By the time I arrived with friends a rancher named James showed up with a pick up truck and dressed the cow quickly before helping us get it back to our vehicles.  “This is the first elk I ever got on my own.” She said proudly. 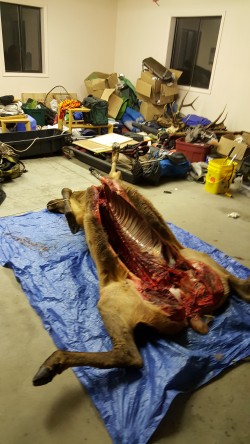 Great job Jackie and thanks for letting me be part of your hunt.